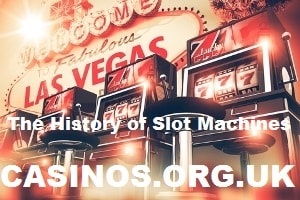 Slot machines are without doubt, the most important assets in any online casino or gambling establishment. Slots always make up a large part of the gaming floor and the game is considered as one of the main draws in a casino, which is visited mainly by women awaiting their husbands who are busy at the poker table. The following are some of the key points that we are going to talk about within this chapter;

If you are reading this guide it is probably because you want to know more about this amazingly addictive pass time. If so, then you have come to the right place because this guide is going to tell you all there is to know about slots machines. In the following pages the reader will get to learn about the rich history of slot machines, how their unique design came into being, and the complex programming that goes behind the making of some of the most addictive and well known slot machines known to man. Here, you will also find the secrets to increase your odds at winning against the slot machine.

It’s easy to see why the popularity of slot machines has grown through the decades, and still begins to grow by making the transition to online formats that brings all the excitement of a real life casino right in the comfort of your home. It’s safe to say that the worldwide popularity of slot machines have far surpassed all other table games combined. Some of the reasons for this huge amount of popularity are that;

The following are some interesting facts about the history of slot machines.

Slot Machines and the Liberty Bell

The following are some interesting facts about that slot machine; 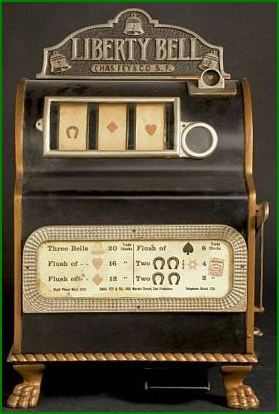 The first slot machine that was designed by Charles Fey was simple yet elegant, with none of the bells and whistles of today’s popular slot machines. The three-reel design in slot machines of today is powered electronically which is a far cry from their predecessors that worked on cogs and gears. While Fey’s design was not called a lot machine at the time, if placed in a casino today, it would easily be recognized as one.

Charles Fey invented the first game that featured spinning reels, but there were other wagering machines that were played by inserting coins around before the Liberty Bell. A poker-based spinning machine was designed by Brooklyn-based Sittman and Pitt in 1891, which featured 50 playing cards on five spinning drums each of which had 10 card faces, to display a five card poker hand on each spin. The better the hand, the more a player would win. While both devices had some differences and similarities in them, both required the player to pull a lever, which led slot machines to be known as “one-armed bandits.” Another similarity in both these games was that players were required to insert a coin in order to start playing.

The Difference in the Two Designs

At the time, other popular games were color wheel games which had vertical slot wheels that were all divided into different segments of colors. The player had to wager on which colors would show on each of the reels with a top indicator. But, it was Fey’s design which would revolutionize slot machines and change the way slots were designed forever.

Herbert Mills was a Chicago-based manufacturer who introduced the three reel slot in 1907. The slot machine was named “The Operator” and was just one of Mills’ many coin-operated inventions which included;

The slot machines that Mills had designed gained huge popularity at the time and were used at many casinos. Mills was also the first to use fruit symbols for his slot machines. The inclusion of fruits to slot machines has had such a profound impact on slots in general that they are normally referred to as “Fruit machines.”

While slot machines that paid off money were considered illegal in the United States until 1931, when the State of Nevada legalized casino gambling, monetary payoffs could only be made discreetly. During that time, slot machines were being used under the guise of ‘Trade Stimulators.’ The following are some of the ways in which these trade stimulators were being used by smart merchants.

Trade stimulators were used by merchants who placed them on counters in an attempt to attract more customers.

These trade stimulators used merchandise to payoff winners rather than money. Sticks of chewing gum became one of the favorite payoffs and the logo of the Bell Fruit Gum company soon became the inspiration for the bar symbols found in many of the slots today.

The chewing gum symbol inspired other well recognizable symbols on the reels of slot machines such as watermelons and cherries. While the game at the time was being played with legal prizes, as in, no cash payoffs, there were certain secret locations where the players could exchange the merchandise they won for cash. 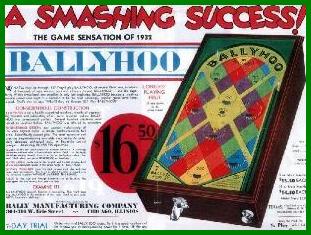 Today, the company is known as Scientific Games, but back in the day, Bally has positioned itself as the only major competitor to the slot machine which was designed by Mills a few years before gambling was legalized in Nevada. Bally’s first foray into slot machine, and Mills territory was with its trade stimulators. Called the “Bally Baby,” this trade stimulator was placed on countertops and paid off in reward cards which could then be exchanged for sticks of chewing gum.

The Rise of Bally

It was not before long that Bally took over the slot machine arena, and pushed Mills’ slot to the side lines. Bally enjoyed decades of being at the number one spot in slots, which was mainly due to its creativity and innovation. Some of the more notable innovations by Bally were;

Until 1949, slots were being played by the hundreds of thousands across the US. But, in 1950 Estes Kefauver a senator formed a congressional committee to stamp out corruption and zeroed in on gambling, putting slot machines at the top of his list. In 1950, the Johnson Act, a new federal law was passed that intended to wipe out the slot business. Since Federal law is applicable to matters that cross state lines, the Johnson Act made it illegal for slot machines to be transported interstate, or any state where slots were deemed illegal.

During the same time, many states passed similar laws that made slot machines illegal, which led to vast numbers of slot machines being seized and destroyed. But, there was one state where slot machines were not illegal, and that was the state of Nevada. This led to most slot manufacturers packing up and moving their operations to Las Vegas and Reno.

What manufacturers at the time were not aware of was the Johnson Act had one loophole. It described the slot machine aka “The poster child of evil” as a device that had spinning reels with symbols on them. This led to the design of a new revolutionary game by an enterprising young man. In 1955, Zeke Wolf came up with a slot game that was designed using pinball parts, and did not feature reels. Instead, the new game design called “Jumbo” featured flashing lights, circus symbols, and pain out in replays.

Zeke Wolf was convicted for breaking the law when a shipment of Jumbos were seized by the authorities. Wolf appealed to the Chicago Court of Appeals which led to the conviction being reversed on the grounds that the Johnson Act did not apply to his design since it did not feature spinning reels, which was a common feature on all slots at the time.

This ruling was being observed by many slot manufacturers who also contributed to the cost of Wolf’s trial. In the end, the result led to a glorious period in slot machine history where all kinds of electronic slots were being manufactured that varied in complexity and payoffs. Some of the slot manufacturing companies that stood out during that time were Keeny, Bally and Games. And while they never really caught on in Nevada, their popularity spread like wild fire across the US and abroad.

“The King of Slots”

William Silas “Si” Redd is more popularly known as the “King of Slots” and credited for creating profitable coin operated machine routes through the Mississippi and Illinois, and he did it all while America was going through the Great Depression. Redd’s journey began at the age of 17 when he accepted a used, 1932 “Goofy” penny pinball machine as payment on a $16 loan he had given to a friend. That machine launched Redd on a career that would last three-quarters of a century.

In 1942, Redd was offered to buy the New England distributorship for Wurlitzer jukeboxes. While that stint didn’t last long, it did provide Redd with the opportunity to amass a wealth of knowledge and contacts within the country’s growing gambling industry, which would later on lead to him becoming the most important person in the gambling industry.

Later on, the president of Bally Manufacturing Company Bill O’Donnell hired Redd as their distributor in Nevada. Redd would move to Las Vegas in 1967 and start Bally Distributing Company. Redd went on to make a lot of money as distributor of Bally slot machines and decided to venture into manufacturing himself.

After Bally Manufacturing Company bought the venture, Redd founded the company Sircoma (SI Redd COin MAchines) by purchasing a couple of local going concerns, and more notably, Fortune Coin, the manufacturer of the first ever video slot machine. This resulted in a court battle between Redd and Bally, which ended in both parties agreeing to a sensible alternative. That Bally would not sell video slots and Redd would not sell slot machines featuring reels for five years.

When video poker became a huge success Redd’s company went public, sold its shares and changed its name to International Game Technology or IGT. While Redd did agree to not selling reel based slot machines, that didn’t stop his company from manufacturing them, and once the five year period was over, Redd’s new company, IGT released a full range of electronic slot machines that featured stepper motor reels.

Based in Reno, Nevada, IGT would go on to provide an alternative to Bally’s traditional and well recognized slot machines, and would become the world’s largest slot machine manufacturer. IGT achieved a breakout hit with Draw Poker, which was the first video poker game to appeal to the mass market. In 2014, the company merged with G-TECH, an Italian based lottery leader who also has expertise in gambling technologies. Some of the more notable gaming innovations that IGT is credited with are;

Take a look at any casino floor and you will notice a significantly higher amount of video slots as compared to the ones with mechanical reels. Since the slots that were being developed in the 80s to mimic the three-reel experience failed miserably, something new had to be brought to the table to attract more players.

Video slots were introduced for the first time in the US that featured video representation of the reels. The first slot to have video spinning reels was called ‘The Game Maker’ and was released in 1994. The game not only included a slot but also video Blackjack and video Poker that were housed in a single unit.

The immense popularity that the Game Maker enjoyed was unheard of at the time, and still remains one of the single most influential innovations to happen to slots. Other slot makers such as WMS and Aristocrat came up with their own inventions with bonusing slots which helped the rise of video slots. Nowadays, video slots casinos have taken the slot machine experience to a whole new level in the UK and the rest of the world. It’s no wonder that video slots make up for up to 80% of slots that are in casinos today.

Check Out Some More Slots Guides: