As a game that borrows its mechanics from the Book of Ra slot, and the many other games that have been based on it, Scroll of Dead does manage to bring something unique to the table, but it’s not going to be in the theme or design. It’s still a slot machine that is based on the Ancient Egypt civilization, and on its beautiful Queen, Cleopatra herself.

In addition to images of Cleopatra, the reels are also going to be populated with images of snakes, Horus, Ankh, and the five Royals from the top (10-A). A Scarab is the one selected to act as both wild and scatter.

A developer that launches about 50+ new slot machines per year, Play n GO has managed to amass an impressive collection of such games in recent years. They have a lot of games that innovate, but there are plenty that don’t quite manage to do that. Their collection of Ancient Egypt slots is one to pay attention to as well, including the series that Scroll of Dead is a part of, where you also get Legacy of Dead. Rich Wilde and the Book of Dead, Golden Osiris, or even Cat Wilde and the Book of Dead, these are all examples of work they did in this space. 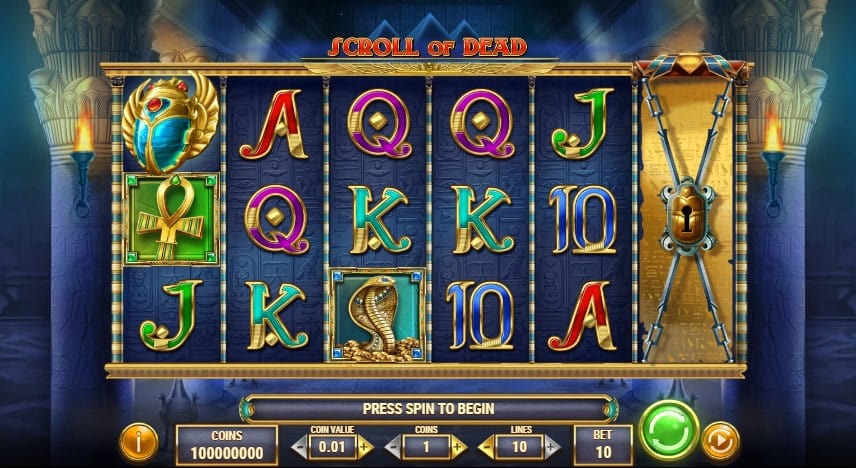 5 reels and 10 lines are used to start with, but a 6th reel will unlock during free spins. This is the part that’s different from other Book-style slots, and it’s not a bad addition.

To start with, let’s take a look at the only feature symbol that Scroll of Dead provides us with. It’s the Scarab that is placed in this role, rather than the usual Book icon that is chosen in these games. It’s used as a wild symbol often enough, since it can do that even if it only lands once.

However, your target is to ultimately have it on the reels 3 to 5 times, since a reward of 2x to 200x the stake is paid, and the free spins are triggered.

The feature will consist of 8 free spins, during which you go from 5 to 6 reels. A 6th scatter can land on the reels as well, so the rewards go up to 500x the stake when the feature retriggers.

A standard expanding symbol is chosen at random, and it will take over the reels it lands on. One more difference, is that you just need 3 or more reels covered by wild symbols, to form combinations on the 10 lines. These special symbols don’t have to appear adjacently.

Have the right symbols turn special, and you could be looking at a jackpot of up to 7,500x the stake. It’s one other way in which Scroll of Dead improves on the original recipe. It looks like 90% of the slots launched in this category will have their top jackpots at 5,000x, but it can certainly be better.

It should also be mentioned that this is a slot machine that has high volatility, which is standard for the category. RTP is at 96.28% or lower, depending on the RTP level that the casino prefers to use.

Scroll of Dead is one of the more interesting takes on the Book-style slot machine, improving through the addition of a 6th reel, which adds to the difficulty of getting a top paying combo, while boosting the prizes as well.