Some elements related to Golden Osiris feel underwhelming, but that’s only if you’re used to seeing a lot of these Ancient Egypt themed slots. Odds are that you’re going to know at least a couple of them which look great, and Golden Osiris doesn’t quite fit into that description. As much as the look of the game is dated, I’d still say it stands out, due to its large game area, which relies on a cluster pays system.

The symbols you’re going to find on its reels, will involve a series of gemstones (four of them, colored in green, blue, yellow and red), along with images of Osiris, Bastet, Anubis, Ankh and a Scarab. A W wild and the Eye of Ra scatter are also included.

Play n GO has released over 50 slot machines in 2020, and Golden Osiris is one of them. Given that they’re launching so many new games, it’s amazing what kind of quality they consistently manage to implement. It’s one of the industry’s top developers, and always recommended if you’re looking to try out some new game. 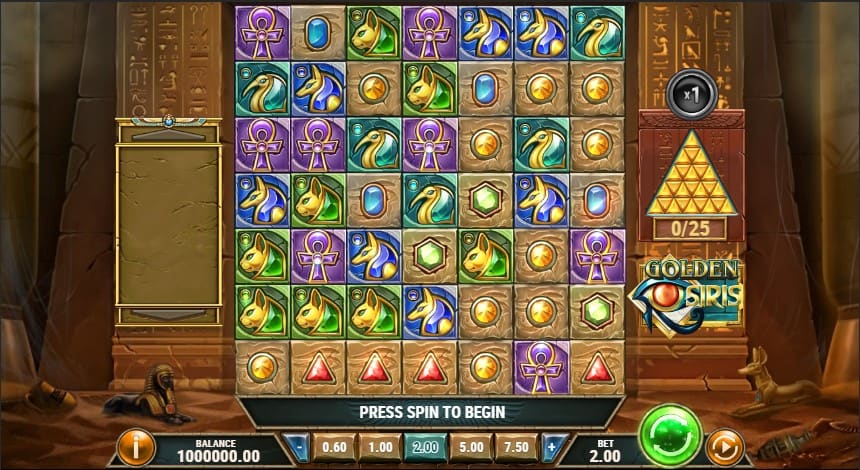 Golden Osiris allows for wagers to start from just $0.10, but if you can afford it there are also options as high as $100 for you to select.

You play this one on 7×7 reels, so with a total of 49 symbols visible at the same time. You need to form clusters of 5 to 15+ matching symbols, in order for a combo to form. These matching symbols have to touch, either horizontally or vertically, with at least one other from the cluster.

Following the formation of any new cluster of symbols, a fall mechanic is implemented, designed to remove winning positions and bring others to fill those gaps. It’s quite the common mechanic these days, but it’s appreciated.

One additional result of the fall mechanic, is the uncovering of wilds, which may hide underneath highlighted positions. Removing the symbols found on top will reveal them, and allow them to be used. Besides the substitution ability, which is already there, these symbols can also have up to 10x multipliers, which they can use to boost the value of any new winning clusters that they help form.

As you’re forming clusters, and going through falls which get you additional wins, a Pyramid Meter will also be charging, on the right side of the screen. You need to get 25 winning symbols, from one or more clusters, in order to fully charge the meter within a single paid spin.

Once charged, the Pyramid selects one symbol at random, and then turns all its neighbors into it.

There is also a multiplier that the Pyramid gives a boost to, provided that you recharge it multiple times in the same spin. It goes up to 3x for the first charge, and by 3x each time after that. It could reach 30x.

You’re even getting free spins in Golden Osiris, via scatter symbols with the Eye of Ra. The advantage is that the pyramid is charged at the beginning of the spin, and it will chose from the top symbols to transform its neighbors into it.

There are a lot of things to like about Golden Osiris, but the 12,000x the stake top payout is definitely at the top of my list. It’s a game which has higher volatility, but that’s not that big of an issue, given the rewards which are possible.

Golden Osiris looks like a fun game, though with considerable risk involved, so it may not be a great fit for a beginner. Those that can take on the extra risk, are likely to appreciate its potential and gameplay.

Sisters of the Sun