The idea of the piggy bank has been used before, as a theme for a slot machine, so seeing it turned into an actual bank with pigs as main characters is not unique to PiggyPop. That being said, I do like what AvatarUX and Yggdrasil are giving us inside, a modern slot machine with excellent graphics and attention to detail.

You will find some symbols that are not as interesting, and of course I’m referring to its use of Royals for the low paying icons. There are only three of those, followed by three medium symbols with images of a perfume bottle, a cocktail glass, and an emerald. High symbols also come in three variants, with three of those pig characters (client, guard, and banker). The Super High option is the Golden Piggy Bank.

The name Yggdrasil might be associated with this slot machine, but it’s actually AvatarUX that did most of the work. If you want to find more games of theirs, I’d recommend looking for titles like HippoPop, TikiPop, or PapayaPop, among many others using the PopWins mechanic. 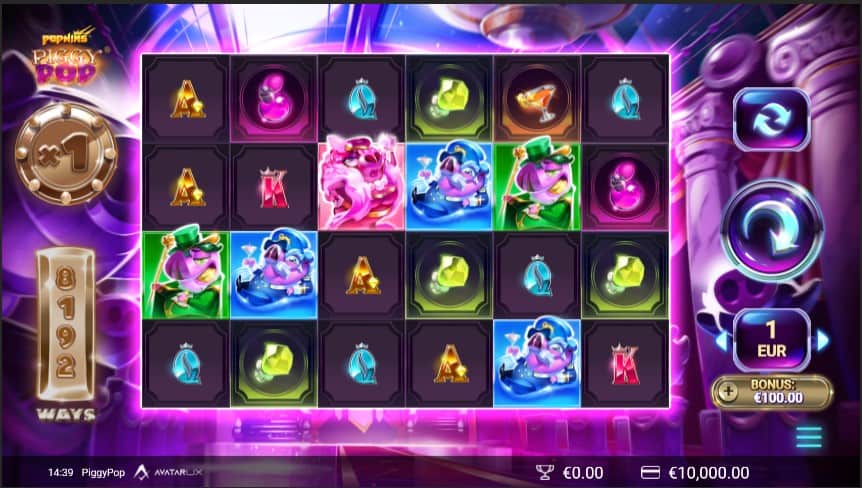 Depending on the budget available, you can go for a smaller bet value, even as low as $0.20, or with one as high as $80.

The initial game area provides you with 6×4 reels and 8192 ways to win. The PopWins engine can give that game area a boost, but to get there you will first need to form winning combinations, with 3+ matching symbols that show up on adjacent reels. What’s interesting here, is that you don’t need those symbols to start from a certain point.

Once you’ve formed a winning combination, the PopWins mechanic triggers. The winning symbol gets replaced with 2 others, which gives the reel a boost. The new symbols can bring on their own wins, and this keeps bringing more symbols and expanding the reels. Up to 6 symbols can be obtained for each reel that is involved, and even up to 8 once you get to the free games (up to 524,288 ways possible then).

Accessing the free spins is only possible once you’ve expanded the game area to 6 symbols for all reels. This then gets you a feature where the starting size of the reels is somewhere between 4-6 symbols, but can be taken much higher (up to 8 symbols for each one). Between spins, the reels reset to the size of the smallest one at the time.

An advantage of the free spins, is the increasing multiplier, going up by 1x after each round. Another one is the presence of the Golden Pigs, which will increase the number of these symbols on all reels, depending on the number they have attached. Once the entire game area is unlocked, the Golden Pigs have an increased multiplier by 2x.

Given the number of potential ways to win available in PiggyPop, it’s a bit of a surprise that it can’t pay even more. Its top jackpot is worth 10,690x the stake, but it should also be noted the combination of high volatility with a 95.50% RTP. It’s not the best combo for a game, but an experienced player could still handle it.

PiggyPop continues a very successful series from AvatarUX and Yggdrasil, and I would recommend it to anyone that enjoys the PopWins mechanic, or slots with expanding reels in general. The RTP would be its one major disadvantage, since so many competitors will do better in that one area.