Whether you’ve lived through the 80s or not, there is something appealing about that era, for many of us. The disco clubs of the era were the place where everyone wanted to be, and have fun dancing, and Reel Desire relies on that idea. It’s a club that we’re getting in the slot’s background image, and a couple of the clubbers are main characters inside. The design is good, it has a touch of retro influence in it, and the neon lights are everywhere.

With more than 100 slot machines under the belt, Yggdrasil is going to be a familiar name for many. They’re easily found at online casinos, they design games with superb graphics, and they tend to be a lot of fun to play. Some of the slots that might be familiar to you, will include Holmes and the Stolen Stones, Frost Queen Jackpots, or Vikings Go Berzerk. 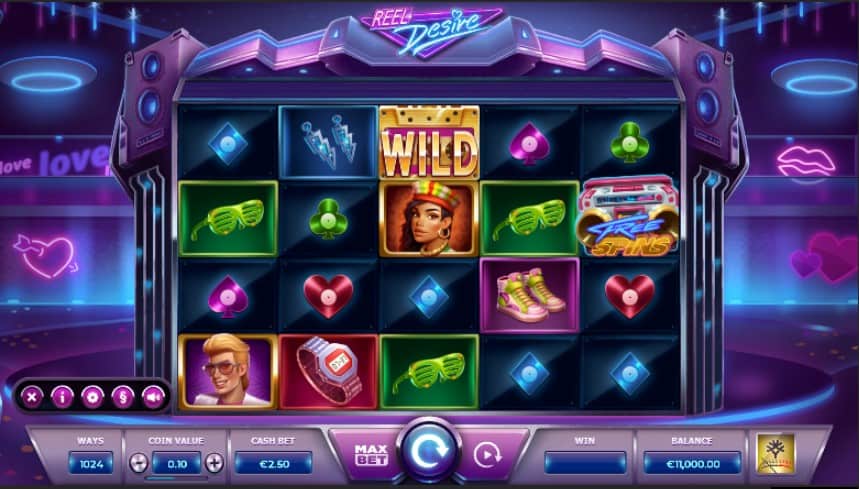 5×4 reels will feature 1024 ways to win, a lot of potential combinations being allowed to form, if the requirements are met. The prizes will come when 3+ symbols are on consecutive reels, left to right. As long as they’re on the right reels, the combinations will form, as all potential situations are covered through the ways to win system.

Regular spins can end up bringing you a random feature, which they call Reel Desire. It’s going to be very profitable, as it can transform up to 5 reels, filling them with wild symbols.

Regular Cassette Wilds are used inside, and they can be substitutes, which contribute to all wins formed through their reels.

Multiplier wilds are also possible, boosting wins by 2x and triggering respins. Only the reels 2, 3 and 4 may get them though, and only during paid spins.

The Boombox, another image that will remind some of the 80s, is your scatter. It’s marked with a Free Spins logo, so it’s clear what it does for the player. Landing 3 to 5 symbols gets you 10 free spins. 4 or 5 of these will also bring some rewards, worth 50x and 500x the stake, respectively.

Two versions are available for the free spins, and you get to choose which you prefer:

There will be plenty of ways to win (1024), rewards of up to 20x the stake on each one, and a couple of multipliers at different times. It’s going to have a jackpot worth up to 20,480x the stake, which is incredible, particularly since it’s mentioned that the volatility is medium. RTP is good enough, at the 96% we’ve seen mentioned.

Reel Desire gives the player a good selection of features, a big enough game area, and even bigger top jackpots. The fact that it’s not as volatile as some of the other slots which pay well, can only be an advantage.