The Gothic style is not usually the main focus of attention in a slot machine, just a way for the game’s design to send the point across, particularly when dealing with scary or historic moments. In Gargoyle Infinity Reels, it gets all the attention though, and it inspires not just the surrounding graphics, but also the symbols that show up on the reels. You see a Gothic castle’s decorations behind the 3×3 reels that you start with.

On the reels, the mix of symbols range from gemstones that have been set into gold jewels (card suite icons, if we go by shape), to images of gargoyles of various types and colors (green, red, pink, blue). A Devil Wild is present as well, along with a Green Diamond as a scatter.

The company that worked on Gargoyle Infinity Reels is Boomerang Studios, but it’s a collaboration with Yggdrasil Gaming, so you might see the game under either name. The Infinity Reels mechanic has been licensed from ReelPlay, so it’s not their own innovation, though it’s not the first time they use it. 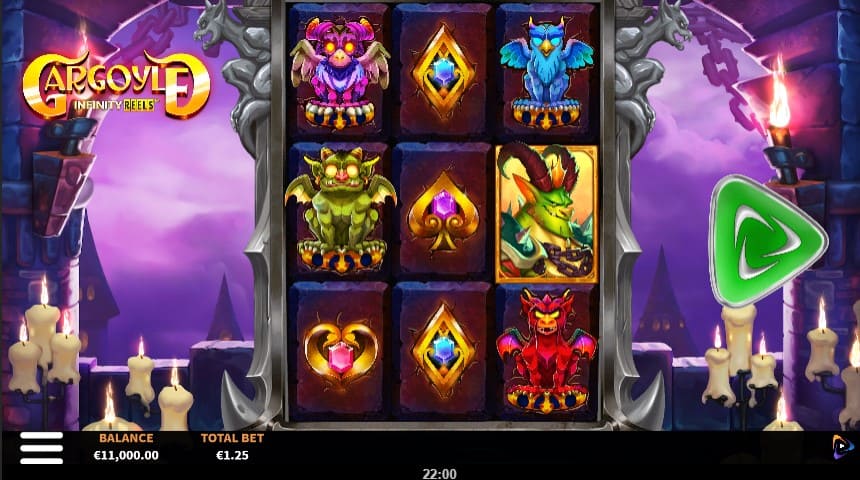 Setting up the bet shouldn’t be an issue. There will be a certain range within which you need to stay, with the minimum starting from $0.25 and the maximum reaching $10.

The Devil’s image is one of those major feature symbols, that the game offers on all reels. The symbol is to be used as a substitute, whenever appropriate, which is often enough since this is a game with bet ways, rather than fixed lines.

Reaching the free spins is done via scatters, 3 or more Diamonds required for that to happen. The reward will consist of 10 free spins. The wilds get an additional role here, they help you expand the game area, as each new one that lands will give you 1-3 extra positions on the new reel. This is possible only for the current spin, it doesn’t follow across all free spins.

A random jackpot is awarded when there you get a wild that’s 6 symbols high, in this particular mode. The Wheel of Fortune-style bonus that comes next, will bring you a prize worth between 3x and 888x the stake.

Not easy at all, especially as this is a slot machine where volatility is very high, but Gargoyle Infinity Reels does make it possible for jackpots of up to 21,300x the stake to be paid. That would be one really lucky round, over a lot of reel expansions and free spins, but that’s the cap they decided to use on the game.

95.76% is the value of the Return to Player that’s been announced for Gargoyle Infinity Reels. It could’ve been better, but it’s not too far off from the 96% average of the industry.

Gargoyle Infinity Reels blends a Gothic-style design, with a theme that hasn’t been used before, and with a game engine that is enjoyed by many players. The game might have high potential, but it’s not that likely that it can get there, so do know what you’re getting yourself into, it’s highly volatile.

Valley of the Gods 2