Innovation is a double-edged sword, as any experienced developer can tell you. You can go for something safe, like improving your graphics. Or you can introduce new gameplay mechanics, cross your fingers, and hope audiences will like it. This Yggdrasil release doesn’t do things that much differently. We like the attempt to make the slot feel like a mobile game. Still, we suggest Mega Money Rush by Skillzz Gaming if you want to incorporate actual gameplay smoothly.

Because right now, you just click the boss, and hope the attack connects. The animations for this part look great, but there’s no depth there. The rest of the visuals are okay. Nothing spectacular, we’re sad to report! We found a few noteworthy animations, but that’s about it. It’s clear all the effort went into making the special features look gorgeous!

Lilith’s Inferno has several special features. First off, you get free spins with a 3x multiplier if you collect three or more Scatters. You can also land VS symbols, which let you fight one of the bosses!

Yggdrasil Gaming was founded in 2013, though it feels like it was just yesterday. Their talented team immediately made a splash, creating fun and good looking slots which enchanted players worldwide! The team has continued to grow, now sizeable enough to be able to launch a new game or two every single month. For this particular slot, the team has partnered with AvatarUX Studio, a team based from Hong Kong. 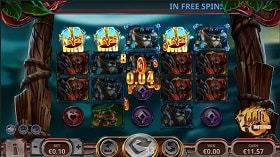 You play Lilith’s Inferno on a 5×4 board with 25 fixed paylines, which pay left to right only. Gamblers cannot turn off individual paylines! Instead, wagers are set by increasing or decreasing your total bet directly. You can stake between $0.10 and $100 on each spin.

Despite small visual adjustments, the user interface should be familiar to anyone who’s played Yggdrasil slots before. All the important information is easily accessible, and setting your total bet is super easy. We quite like it! It’s better than the industry standard that tries to merge desktop and mobile in one layout, usually with disastrous results.

Sadly, not a lot of settings for Autoplay. You can choose up to 1000 auto spins, or to just keep spinning until you run out of funds. In the options menu, you can set it to stop when a special feature is triggered. But we could not find a way to set a win or loss limit, which we feel is a major oversight.

We’re a bit mixed on icon designs. The bosses look detailed and interesting. Clearly, some Eastern inspiration played a part in how they’re decorated! The four playing card royals look a bit different than what we’re used to. But while we like the fact they’re not the same old we’re used to, we’re also not sure if we like the change.

Find three, four or five gorilla Scatters to win between ten to twenty, fifteen to thirty and twenty five to fifty free spins, respectively. If you collect three additional Scatters on the fifth reel, you get five more extra turns, and a 3x multiplier. Ending free spins with one or two collected gorilla Scatters will turn them Wild on the final spin.

During free spins, if you land two VS symbols anywhere on the board, you trigger a boss fight. It looks cool, but it’s mechanically quite simple. Click the boss, and your attack with either hit, miss or be blocked. If you defeat the boss, he will turn Wild for the rest of the free spins bonus. It also awards two more extra turns!

Lilith’s Inferno has a jackpot worth 3968x your total stake. The slot’s RTP is 96.4%, which is above the current industry average.

Honestly, we had a blast playing this game. While we do wish there was a little more to the boss fights, we understand why they’re so simple. Otherwise, they might suffer from the problem Wild Wild Worlds had: where the whole thing seems daunting up front. With stellar visuals and simple but fun special features, we’re sure Lilith’s Inferno will be a smash success. Doubly so thanks to its generous top prize, and a medium variance that makes it much easier to score wins.