The fight for the fate of the world is a tale as old as time itself. The clash of good and evil has always been a compelling tale! In a world where everyone is tripping over each other to pull off mind-blowing stories, simple can sometimes be best. Yggdrasil is well aware of this, which is why Age of Asgard is a simple game thematically. The greatness of this slot isn’t in its visuals, but in its gameplay and bonuses!

Of course, that’s not to say that Age of Asgard looks bad. Quite the opposite, in fact! The background image is clearly designed to reflect the duality we see from the reels. A Valkyrie and a soldier of death as statues. One warm orange flame, and one cold blue fire. Stone constructs depicting Viking warriors and evil soldiers. And all the while, the snow keeps falling, making for an oddly idyllic view.

The slot has large Wilds, which are large 1×3 symbols, and can nudge to cover their entire reel. If they fill a reel, they award a single re-spin. If you get two fully expanded Wilds on the top and bottom board, they clash and create four smaller Wilds.  And finally, three Scatters combine the two playing fields, creating 5×6 reels on which 10 free spins are played!

Yggdrasil faced stiff competition when it first launched in 2013. Many other software providers launched at the same time. And of course, there were the existing iGaming giants to worry about! But through it all, Yggdrasil managed to stay ahead of its competition, delivering quality games one after another.

The developer is closing off 2019 on a high note, having won two awards in 2019. They’ve been honoured as Innovator of the Year at the International Gaming Awards. And as the best Innovation is RNG Casino Supplier at the EGR B2B Awards. 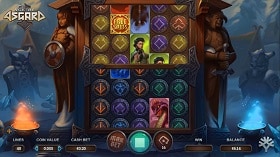 You play Age of Asgard on two 5×3 boards, both of which have 20 paylines separate from one another. Both paylines pay left to right only. There’s no way to turn individual paylines on or off. To change their bet, players have to change their coin value. This allows gamblers to wager between $0.20 and $200.

The layout is the same one Yggdrasil always use for their slots. The only change here is that it’s been stylised to appear Norse. The Spin, Autoplay and Max Bet buttons look like wooden shields, for example.

Using the Autoplay button, you can only set the number of auto spins to be played. If you want to set win and loss limits, or to set a single win cap, you have to go into the options menu.

Credit where it’s due, you can see a lot of developer attention went into icon designs. Everything from the basic runes to the great warriors has a good and dark version. These usually stay in separate playing fields, but come together during free spins. It’s only then that you can appreciate how much they contrast each other, and how great it looks as a whole!

Land a large Wild so it fully fills a reel, and you receive a single re-spin. To assist you with this, the Wild has a chance to nudge up or down to completely fill the reel it is on. It is possible to win more re-spins by scoring additional full-reel Wilds on both playing fields.

If two Wilds which fully cover their reels find themselves in opposite positions, they will Clash. This creates up to four single random Wilds. If those Wilds land on high value symbols, that entire stack will be covered in Wilds.

Collect three Scatters to win ten free spins. During extra turns, the reels combine into a giant 5×6 board. The two full-reel Wilds now form a giant Super Wild. It can still nudge up and down to cover the entire reel. If and when it does, it awards the Clash and a single re-spin. You can also land six free spins icons to win twenty Ragnarok free spins. During this bonus, only high value symbols will appear on the board.

If you get five out of six free spins symbols, you trigger the Randomizer. It can upgrade your regular free spins into Ragnarok free spins. If that fails, it will just grant you a cash prize worth 1000 coins.

This medium variance slot has a jackpot worth 2448x your total stake. The game has an RTP of 96.2%, which is above the current industry average.

While it doesn’t seem like much at first glance, all it takes is one good chain of bonuses for Age of Asgard to win you over. Both gameplay and special features deserve the highest praise, as do the interesting visuals. We do wish it had a higher volatility and a slightly better payout, but that’s not going to stop us from wholeheartedly recommending this slot.