The call of the wild appears to apply to developers as well, since many of them have such a game in their collection. The wolf is at the center of many slot machines, and it’s got one more in this case. The action takes us in the mountains, on forest-covered slopes and next to fast-flowing rivers, while on the reels its top symbols will be the region’s wild creatures.

The white wolf might be the top symbol used inside, but he’s not alone. From mountain lions, to deer, eagles, or bears, you will use these for the best-paying combinations that Wolf Call has to offer. A howling wolf as the scatter, and a Diamond as the wild, are other noteworthy symbols.

Wolf Call is a joint release, designed by SpinPlay Games and available via Microgaming. Its operators get exclusive access to this slot machine, and plenty of other games are released each month with those same limitations. 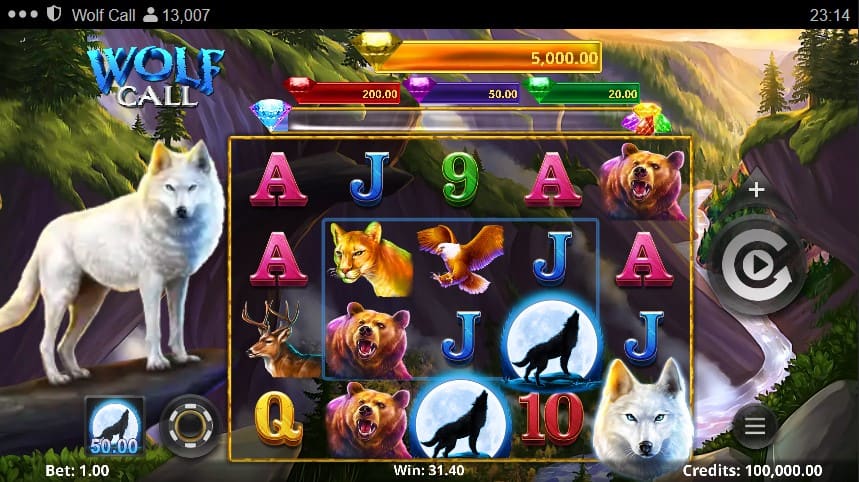 You don’t have to break the bank, to play Wolf Call, but the reason for that is that it’s highly volatile, and you can go through your funds fairly quickly. The minimum bet requires $0.20 each round, while the maximum one can go up to $25.

It’s a slot machine with a ways to win system, where forming a combination is possible when you have matching symbols landing on 3+ consecutive reels, starting from the leftmost column. As you have 1,024 ways to win/lines available on the 5×4 reels, all possible combinations are covered.

One of the feature symbols, the Diamond will be the one used as a wild in this case. It’s a substitute for almost all symbols, the only exception being the Howling Wolf Bonus.

A Power Range is also in use, and this is a game area that occupies the middle positions on the reels 2-4. Should a wild appear there, it will have a 2x multiplier during paid spins.

Speaking of the Howling Wolf, that’s the slot’s scatter, and a symbol which can land up to 5 times at the same time, once per reel. If you have between 3 and 5 scatters visible, the game triggers 10 to 20 free spins. It’s a feature with a larger Power Range (the entire area on the middle reels), and with 2x to 5x multipliers now applied by wilds landing in that zone.

For many, the ultimate feature of Wolf Call will be the Diamond Meter, and the four progressive jackpots that can trigger through it. To fill the meter, and trigger the bonus game, you need to collect Diamond Wilds when they land. This happens automatically.

In the Diamond Jackpot bonus, you have to match 3 icons of the same type, to be able to claim the jackpot which is associated with that color. Up to 5,000x the stake can be paid, if you get the Mega Jackpot.

A top jackpot of 10,000x is the target of Wolf Call, and that’s a fine prize to be going after. It’s going to be highly volatile as well, but the risk often matches the potential of a game like this.

While several RTP values are possible, the one you want is 96.44%, the slot’s highest returns being expected there.

Wolf Call doesn’t look like a unique slot machine at first, but once you discover its features, you will find that it can be interesting. Get a version with the maximum RTP, and that 10,000x top jackpot manages to look inviting.