Amber Sterling’s Mystic Shrine might be just one more adventurer themed slot machine, but you will find some unique aspects inside as well. I’d include the connection to India and its temples especially, since the majority of the other slots in this category will take us to places like Egypt or South America.

An Indian temple, and an archaeologist/adventurer called Amber Sterling, these are two of the cornerstones of the game’s theme. You will find a special Action Reel at the top, while feature symbols will include multipliers, bonus mirrors, or Wild coins. Regular symbols give us images of Buddhist deities, Elephants, a Compass and an Oil Lamp. The list then continues with the five top Royals, the ones from 10 to Ace.

The actual developer of Amber Sterling’s Mystic Shrine might be Fortune Factory Studios, but the one they worked with is Microgaming. Together, these are likely to continue to collaborate on new slot machines, which will be exclusive to Microgaming’s Quickfire platform. 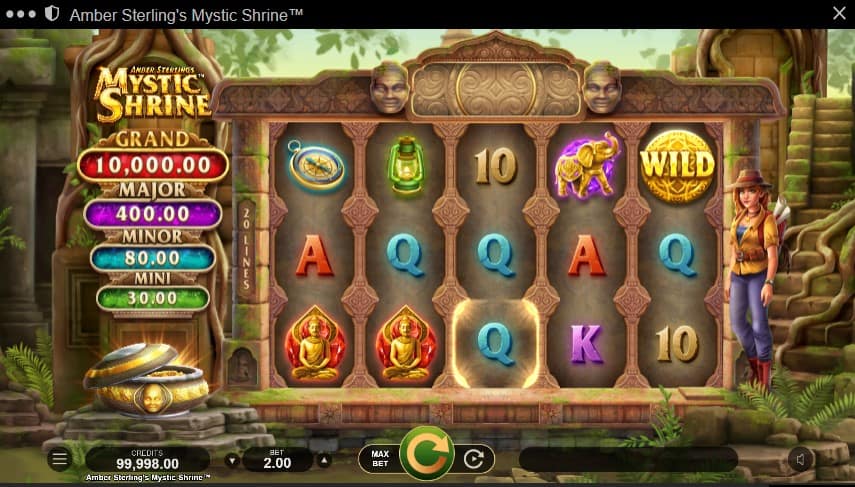 The smallest allowed bet is $0.20 per spin, while the highest one will reach $50. The game area stays the same, but the prizes increase in value.

It looks standard at first, since you have 20 active lines on 5×3 reels. The Action Reel from the top changes things though, at least where features are concerned. The way to get paid stays the same, and it’s done via 3+ matching symbols appearing left to right on a line, and forming a winning combination.

If you look at the top of the reels, the middle area will feature a special zone, called an Action Reel. It’s closed typically, but it can open at random moments, and reveal either access to Blazing Wild Streak, or 1-3 marked positions (flames).

Marking a position will add to it a multiplier of 1x. This can happen multiple times, and in time you could get a symbol position to a 5x multiplier, by getting several random markings on it. You start off with the bottom position on reel 3 marked, and it stays that way. You get to use the multipliers and the marked positions when you trigger Blazing Wild Streak.

Get the Respin icon (x1, x2 or x3 logo) to show up on the Action Reel, and you get access to the Blazing Wild Streak, as I already mentioned. You get a single respin, during which you use the marked positions with the multipliers which were accumulated on them. Form combinations through those positions, and the wins will be multiplied by the amount you collected from it. As you can get several multipliers in a single combo, there is some serious potential in this feature.

One more important feature, the bonus game is the one which can deliver one of four fixed jackpots, the top one being worth 5,000x the stake. You need three scattered Bonus symbols first, on reels 2, 3 and 4. Once inside, you make picks, and you get the jackpot associated with the first three matching icons uncovered.

There is a wild symbol as well, and one with decent payout potential, up to 6x the stake being paid directly by it. Mostly, it will be used as a replacement.

Amber Sterling’s Mystic Shrine does at least one thing right, it delivers a well-designed Indian-themed story. There are other elements which feel unique, such as the Action Reel, but I wouldn’t call them impressive.