Whether you’re a fan of pirate-themed slots or not, I think you will agree that Book of Captain Silver looks particularly interesting. The visuals have something to do with that, so it leaves a good first impression, but you will appreciate its rewards and overall potential as well. Before we get to that, let’s check out the design. It’s different, as it appears to place the action inside the pirate ship, rather than on its deck. It’s a bit more brown than you’d like perhaps, but the design is good, and the symbols are appealing.

It all starts with the usual mix of Royals, in the low-paying symbols (10 to A), and then we’re getting to the themed icons. The latter will include a Compass, Pistol, Pirate Ship, and Captain Silver. The Book is going to be both wild and scatter, as is usually the case with Book-style slots. 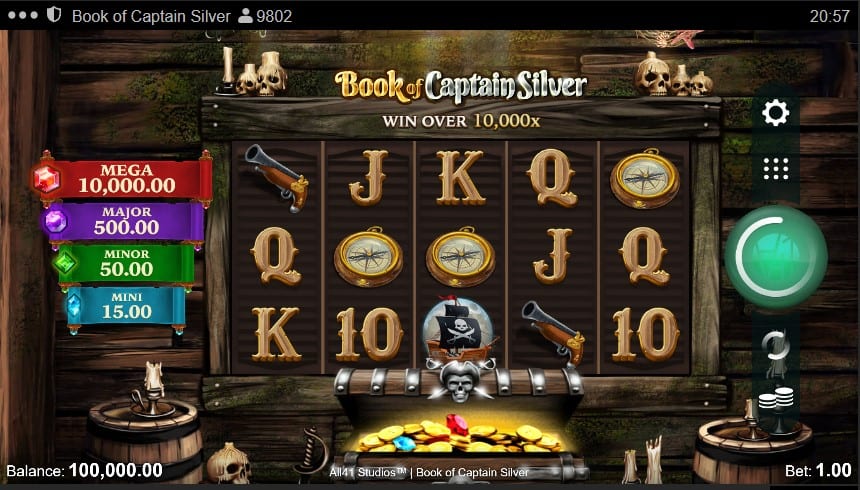 This slot machine, along with quite a few others, is one of All41 Studios contributions to Microgaming’s impressive collection of exclusive games. Alongside titles like Book of Atem, Le Kaffee Bar, or Arena of Gold, Book of Captain Silver is the latest addition to this increasing collection of slot machines that the two companies are building together.

Compared with older games, there isn’t too much to fiddle with when you’re selecting a wager in Book of Captain Silver. It can be as low as $0.10, or as high as $25, with plenty of options in-between.

At its core, the slot machine offers a basic system, with 10 paylines being offered on 5×3 reels. The features are the ones that helped make the Book-style genre very popular.

If you’re familiar with Book of Ra inspired clones, you will quickly understand how this slot machine works, and how its basic mechanics are designed. Microgaming has a game with better options and rewards here though, so it has an advantage over the regular clones that don’t make any effort to stand out.

You’re going to have a single feature symbol in the base game, the Book of Captain Silver, which will be both the wild and scatter.

Though it doesn’t appear too often, it can be a substitute when it does land at least once, so it has its uses even during those times.

What you’re really looking for, is for the Book to land 3 or more times. This will get you a prize worth 2x to 200x the stake, along with 10 free spins.

The game selects one of the regular symbols, to become a special symbol during the free spins. It gets the ability to expand, and to take over entire reels that it is present on. Even better, it forms winning combinations by acting as a scatter on its lines, so as long as it lands on 3+ reels, you get paid on all 10 lines that spin.

So far, so good. It’s a standard Book-style slot. What was added, is the Captain’s Wheel, a bonus game that can trigger as you’re collecting Book symbols from the reels. If you get access to it, it spins to reveal one of the four jackpots, ranging from the Mini (15x) to the Mega Jackpot (10,000x the stake).

If you look at the regular side of the game, you see that you can claim the usual rewards of up to 5,000x the stake during free spins. The bonus game, Captain’s Wheel, can take it even further, with the Mega Jackpot paying 10,000x the stake there. Highly volatile, the slot has its RTP at 96.40%.

Overall, it’s better than many of the other Book-style slots we’ve seen so far. Not only can it pay more (10,000x the stake), but it also has a pirate angle that’s much better than the usual Ancient Egypt theme.