The promise of riches through alchemy is one that has convinced a lot of people over the years, particularly in the Middle Ages, less so now. It makes for good content, and it’s no surprise that we’ve seen dozens of slot machines released in this category already. This one is a bit different than most though, with its Cluster Pays system that allows the use of 7×7 symbols. The action is set inside an alchemist’s laboratory, and we see stacks of books on the floor, along with piles of gold coins, scrolls and pentagrams.

The symbols are related, but not that interesting. Mostly, it’s a combination of premium potions and low pay crystals, each type available in four variants (orange, green, pink and blue). The 9th symbol is the wild, which has the look of a portal.

For this particular game, we have a collaboration between All41 Studios and Microgaming. The former designed it, and they already have a couple of decent slot machines that they offer exclusively on Microgaming’s platform. 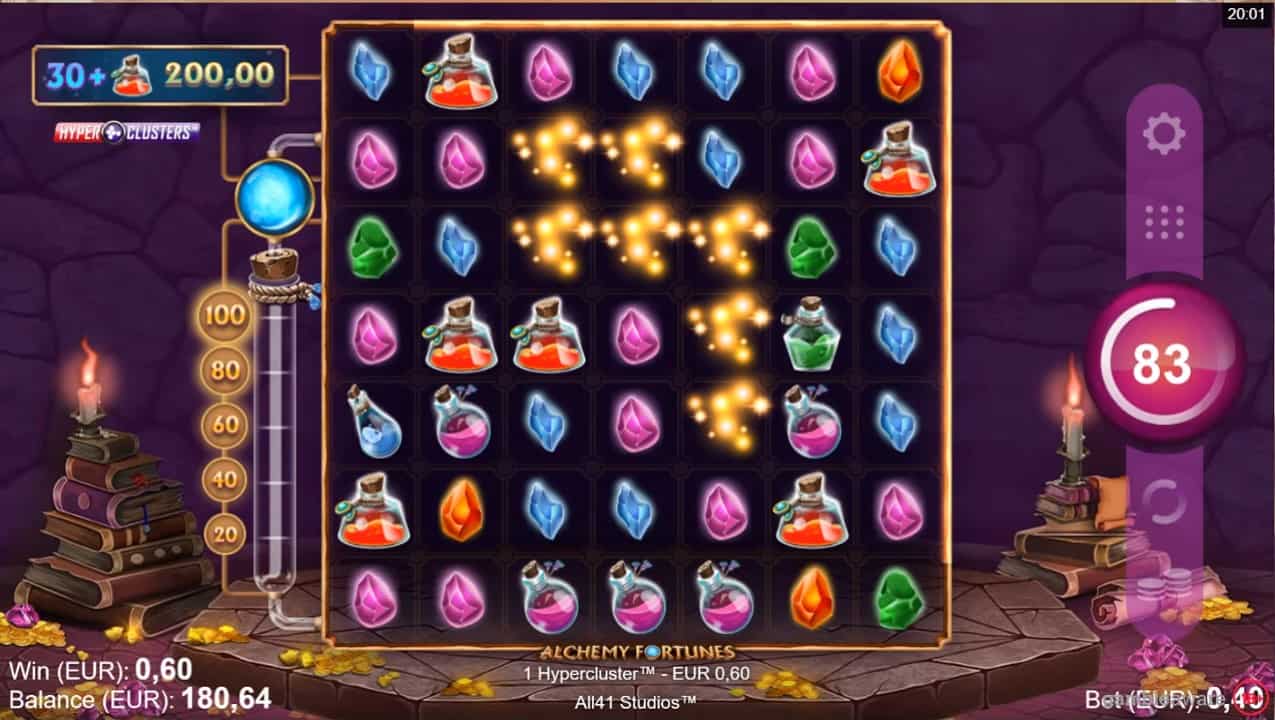 There are no actual lines to bet on, so you are just picking the total amount which triggers the next round. The range available is between $0.20 and $100, for each spin.

For a Cluster Pays game, or Hyperclusters as they call them here, the requirement is to get 5+ matching symbols together. As long as they form a cluster, by touching vertically/horizontally, you get paid. The type and number of symbols involved will decide how much you win. Up to 30 are needed, to get the best possible payouts.

Once you form a winning cluster, the game goes on to activate the Rolling Reels mechanic. It’s a common one, both for Microgaming and other developers, and it works by taking out the winning symbols and allowing new ones to land. If new clusters form, then the Rolls keep triggering as well.

Some help will come from the wild symbols, which will show up and contribute to any clusters forming in their immediate vicinity. At the same time, the game marks the positions where wilds have appeared so far, but this only comes in handy during certain features (Alchemy of Wilds).

A big part of the game comes through the winning symbols that you collect as clusters form, and across the various Rolling Reels. As you get to 20, 40, 60, 80 and 100 symbols collected, you level up and you trigger new features.

As for the free spins, these are a bit better than the original, mostly if you trigger the various features, but not by much.

It’s not a game with very high potential, and it’s expected to pay at most 1,100x the stake. At the same time, it comes with high volatility, which many might not enjoy as much. Given the high hit frequency rate, with more than half of all spins being winners, it’s still a very enjoyable slot. Its RTP is at a 96.41% that most should be fine with.

Alchemy Fortunes is a fun game, which is pretty much what you’d want. The low top jackpot is not as big of an issue as it might sound like, so definitely give this one a try and see if you enjoy it.