Jurassic Park Gold is a branded slot machine, coming from Microgaming and Stormcraft Studios. It’s going to use the same original Jurassic Park movie as inspiration, with images of its actors being present in many of its symbols.

As for the symbols that are shown, five of them have images of actors, while the other five are of low value and they show us dinosaurs.

The creation of Jurassic Park Gold was a job for Stormcraft Studios, but the company that started this series was Microgaming, and many would consider this their game. It’s going to be exclusive to their platform as well. 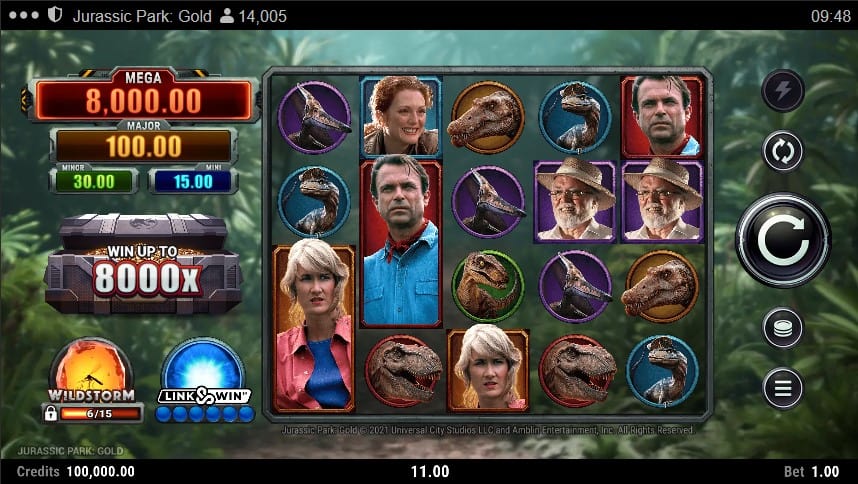 You don’t worry about the bets placed on individual lines, only about the total amount going towards each spin. The range of the wagers allowed is between $0.20 and $30.

Jurassic Park Gold has an above average game area, thanks to the 5×4 reels available. There are 40 lines as well, so you get plenty of opportunities to form winning combinations.

For most, the main feature of Jurassic Park Gold would be Link & Win. Access to this feature can be obtained via Powerball symbols, which show up with prizes or fixed jackpots on them. 6+ Powerballs will get you Link & Win, with 3 respins triggered. The respins reset whenever new Powerball symbols appear.

As you progress through the Link & Win spins, you collect all Powerballs that show up, and at certain levels you end up unlocking additional rows. As you get to 15, 20, 25, and 30 symbols, you unlock the 5th, 6th, 7th, and then the 8th row.

At the end of the feature, there will be a prize paid for each Powerball symbol, and additionally you can also claim one of the fixed jackpots. Up to 8,000x the stake can be paid through this feature.

The Mosquito scatters will be responsible for paying prizes of up to 150x the stake, and also for triggering the free spins. Several types of free spins can be unlocked:

In these free spins, getting wilds to appear in certain active positions will allow them to expand on their reels.

As for the wild symbol, it takes the form of the Jurassic Park logo, and it typically applies a 2x or 5x multiplier during paid spins, and more during free spins. It can land double stacked as well.

Jurassic Park Gold can pay well enough, offering up to 8,000x the stake through its Link & Win respins. Even if you look at its regular combinations alone, the wilds could bring rewards of up to 5,000x the stake just through their own wins.

One of the hundreds of new high volatility slots that have been released in the last year, Jurassic Park Gold has a decent RTP of 96%, at least at its highest possible value.

Jurassic Park Gold is a good enough option for players, especially since it’s a branded slot machine, and it manages to deliver a decent RTP. The features are the same ones that we’ve seen before, there aren’t too many improvements made there.

Legend of the Sword