If you care a lot about pretty graphics and interesting stories, then 777 Mega Deluxe is definitely going to disappoint. The game has the classic fruits as main symbols, and the graphics used inside are going to look quite dated overall. It’s giving you a bigger game area than in those older slots, but that doesn’t make it more appealing.

As for what those symbols actually show you, the images which are used range from Lucky 7s, to Bar logos, Lemons, Cherries, plus the four card suits (spade, diamond, club and heart), stars, moon and lucky horseshoes.

A joint offer, from Microgaming and Crazy Tooth Studio, it’s an exclusive release for casinos which use the giant’s platform. There are hundreds of online casinos that use the company’s software though, so it’s going to be easy enough to find, if you want to try it out. 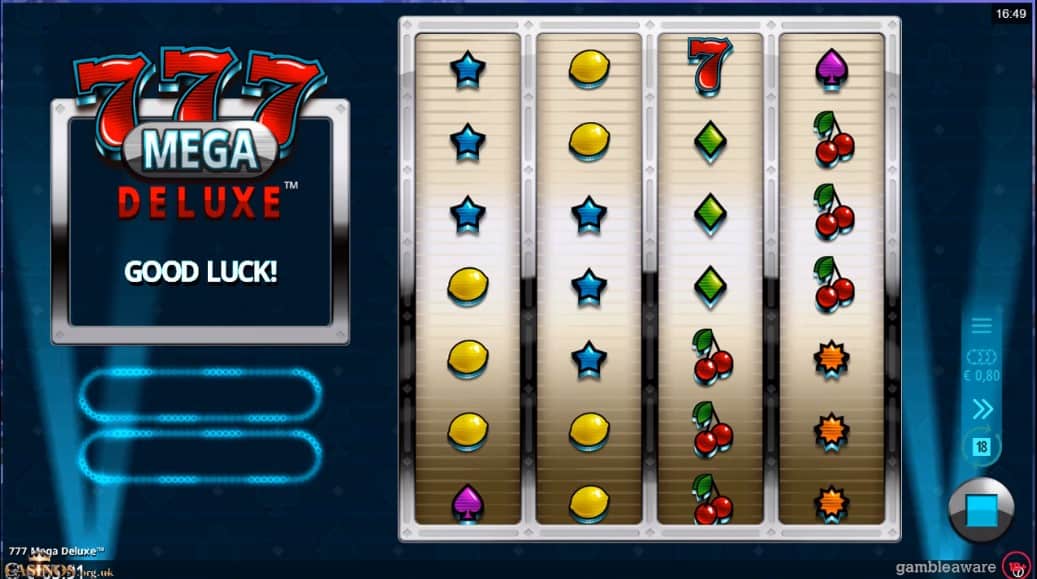 All you have to do, is pick the wager, and you can start spinning the reels. The range of the values offered is between $0.20 and $30.

The game gives you an unusual setup in exchange, using 4×7 reels and 127 paylines. You will get your wins when enough matching symbols land on 3 or 4 reels, and on the same line.

Wilds are being used in the game, and these substitutes will both help you form new wins, and will increase their value by adding 2x and 5x multipliers to them (2x in the base game, with the 5x added for the free rounds).

Whenever you form a new combo, a Respin Insanity mode follows. It will mark the winning symbols with a special area, and it will only change those during the Respin. If any wilds contributed, those are kept in place as well.

The aim during these respins is to form new wins and get paid. Also, if you get symbols within the zone which are of the same type as others from outside, then the outside symbols are added to the Respin area, and the feature continues until that no longer happens.

You will also get help from scatter symbols, though these only show up on three reels out of four (without reel 3). These get you 4 free spins. You will use the scatters which got you into the feature as extra wild multipliers, which will be sticky until the end. The same happens for any other new wilds with multipliers which appear. As mentioned above, 5x wild multipliers are now available.

If you look only at the amount which can come from the slot’s regular combinations, the jackpot of 777 Mega Deluxe would likely feel small. The most that you can get from a single combo is 0.25x the stake. Of course, there are 127 lines to form wins on, along with up to 5x multipliers which are sticky during free spins. Add the Respin Insanity feature as well, and you can start to understand how wins of up to 6,600x the stake have been recorded during testing.

It’s a fairly punishing game overall though. It has high volatility, a very low hit frequency (1 in 6 rounds is a winner), but at least the RTP is at the 96.10% you’d expect.

777 Mega Deluxe is definitely different, so that’s one thing it has going for it. It can pay reasonably well, it changes things up, and it could be a solution for a bored player that doesn’t mind taking on some extra risk.