Red Tiger’s War of Gods has a certain focus on deities and on the battles they had between them, but more than anything it looks like a regular war themed slot machine. It’s the idea that you get if you’re looking at its symbols alone, though the images from the background are majestic and they do make it look like the gods are actually present.

If you look at its symbols alone, you will discover the ones showing the card suits at first, followed by icons with scrolls, skull drinking horns, shields and spears, or helmets. Zeus and Hades are the two gods fighting, and they’re shown as expanding symbols on the reels.

The creator of the game is Red Tiger. Still considered a young company, but with a big brand right now, they’ve been acquired by NetEnt in recent years, and they’ve continued releasing some very interesting slots since then. They still have their share of duds, games with low RTP or too many randomly triggered features, but you can count on the graphics being top notch even then. 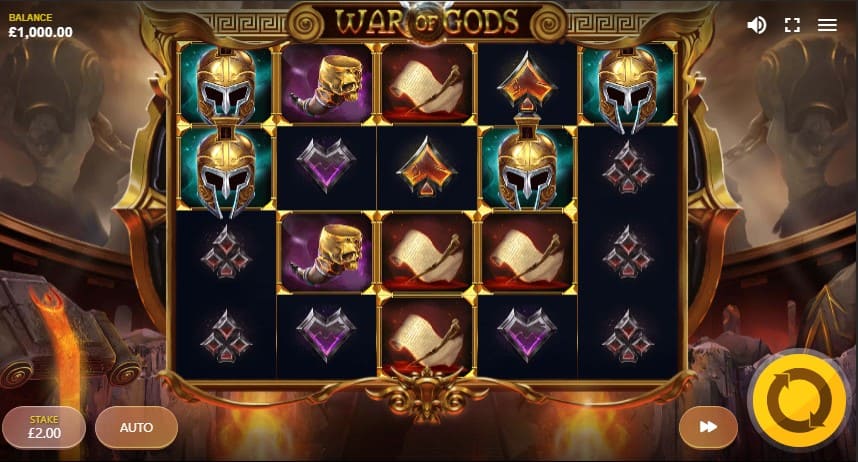 A simple Stake button is found at the bottom, on the left side. Use it, and select one of the values shown by its menu, between $0.20 and $20. This will be your wager for the next spin.

You get to play on 5×4 reels, in a system which even allows for reel expansions. 45 bet lines are employed in this area. 3 or more matching symbols are needed, to form a new combo.

The main features used in War of Gods will revolve around a Hold and Win style bonus game, which comes in different forms.

Wrath of Zeus is a feature which will trigger when you get 2 symbols with Zeus at the same time. The feature delivers new Zeus symbols if you’re lucky, alongside the triggering symbols which are now sticky. These symbols can be upgraded, and they can also expand to take over the entire reel.

Hades Hellfire will also trigger via its own special symbols, with Hades showing, and they also need to appear twice. Once again, you go through respins and try to get additional symbols with Hades. The game area gets the ability to expand with the help of Hades, and now combinations of up to 7 symbols can form on 7×6 reels, with 60 lines active.

Warring Gods is the one where the two gods fight it out, provided that you got one of each to appear in one spin. While going through respins, you get Zeus and Hades symbols to show up, and expand on their reels. Symbol upgrades and reel expansions are both available.

While the Hold & Win features have been popular lately, and they can have decent potential in some games, I don’t particularly like where they’re going in this one. A jackpot of 2,518x the stake feels too low, since the slot has High volatility. RTP is also on the lower side, at 95.66%. On top of that, you also need to watch out for lower RTP settings, which the casinos may choose to use.

War of Gods has good enough features, but with high volatility and a below average RTP, its potential feels stunted, and you can see it in the top jackpot that it can deliver.