Some developers are just naturals at creating slot machines that offer unique new stories, and Red Tiger is definitely one that does this especially well. They’re riding the wave of the crypto revolution as well, with their latest release, NFT Megaways. It’s inspired by the non-fungible tokens, which are often built on Ethereum technology, and give people a way to own digital assets that are unique to them.

As for the type of design that they went for, in trying to cover this particular theme, we’re seeing a mix of coin related icons, along with others that borrow their imagery from popular meme images. It’s all done in an 8-bit style that makes it look like a vintage 80s game.

For the last couple of years, Red Tiger has been doing a great job expanding their collection of slot machines. They’re the ones behind NFT Megaways, as well as about 200 other games that they’ve launched over the years. The company has been acquired by NetEnt in recent years, and now they’re both owned by Evolution Gaming. 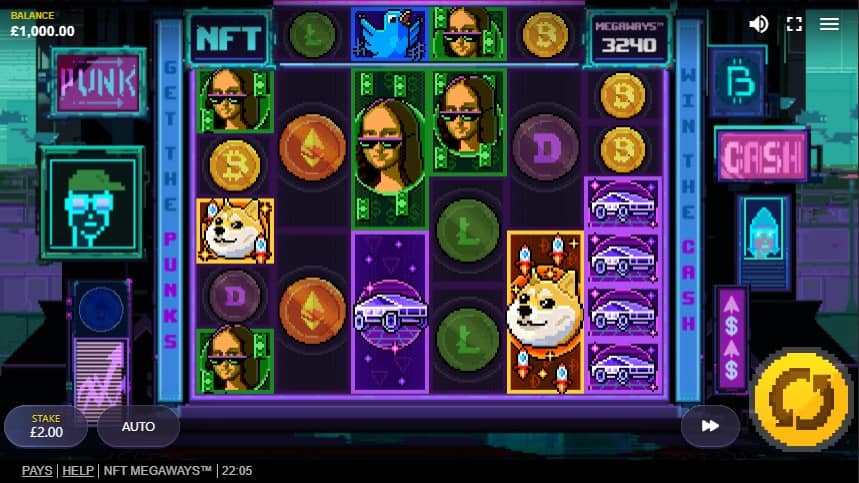 To start things off, it’s going to be fairly easy. Click on the Stake button, on the bottom left, and you have the option to spend $0.10 to $20 on each spin.

It doesn’t matter how much you’re spending, the wager is going to unlock the entire game area. The thing is, it’s a slot with 6 reels that gets a random number of symbols for each column. It’s a typical Megaways slot, with up to 200,704 ways possible, once you take into account the horizontal reel at the top as well.

Once a combination is formed, the Cascading Reels mechanic is going to trigger, removing the symbols that got you paid. A new group of symbols will then land in the available spots, and this can lead to additional combinations. Cascades will keep coming as well, for as long as new combinations form.

The Crypto Punks Bar, which is the 4-symbol horizontal reel from the top, will be the one capable of bringing you wild symbols. There are four types of Crypto Punks, which are capable of landing there, being used as part of the winning combinations formed through those reels. Multipliers of up to 30x can accumulate thanks to them, as they form combinations with lower value symbols and collect them (each symbol from the combo boosts the multiplier by 1x).

NFT Megaways comes with Crypto Spins as well, and those are triggered through the usual 3+ scatters landing on the reels. You get 10 to 25 Crypto Spins, depending on the exact number of triggering symbols (Crypto Spins coins), and there is the possibility to retrigger the feature along the way.

As you’d expect, there is an advantage that the feature has over the base game, and that’s coming from the fact that the Crypto Punks multipliers will not reset between rounds now.

While I found the top jackpot of NFT Megaways to be acceptable, we’ve clearly seen better from this sort of slot machine. Highly volatile, it can pay up to 10,499x the stake in a single round.

RTP-wise, it’s at a lower value than quite a few of the other Megaways slots, being expected to have only a 95.66% return.

NFT Megaways has the right theme, covering an angle that we haven’t seen before in other slot machines. It’s to be appreciated for that, and for the retro design style that they’ve implemented very well. I didn’t like the game’s potential prizes, or the reduced RTP, especially if you compare it with one of the many popular Megaways slots already available.

Clash of the Beasts