Big Time Gaming’s slot machines rarely make a major effort when it comes to design, and we definitely see that lack of interest in Star Clusters Megapays as well. There isn’t any real theme there, just a bunch of gemstones with different colors and shapes. You will likely find them in similar slots from BTG that they’ve released in the past. A total of 7 regular symbols are present, gemstones that are colored in purple (top symbol), red, blue, green, orange, yellow, and teal.

As boring as the theme of this game might be, there is no denying that Big Time Gaming is one of the most impressive developers around. The Megaways engine has had a huge impact in the online casino industry, and they’re trying to do it again with the Megaclusters engine. 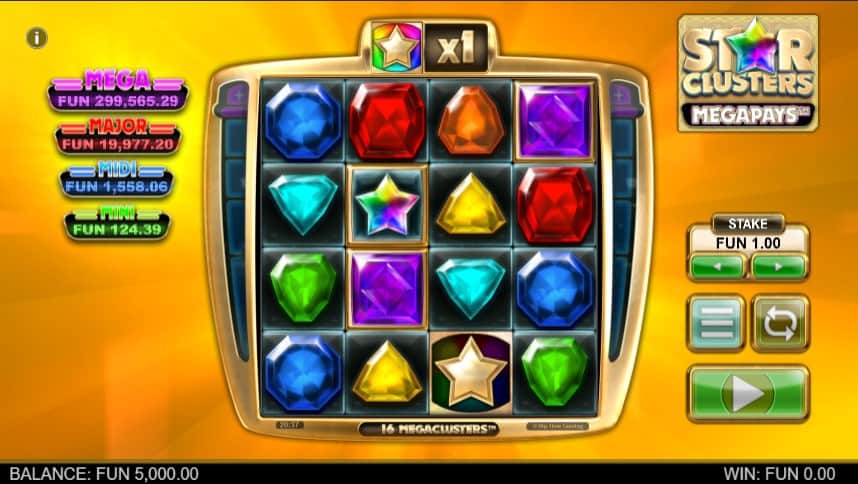 You are asked to select a bet that works for you, and then the game can begin. A betting range is available, between $0.20 and $20, and you pick one of those values available within it.

The game area uses 4×4 reels initially, but as you form clusters of 5 to 25+ matching symbols, you’re getting the winning positions to split into four smaller symbols. This adds to the number of symbols visible, and makes it easier to form new clusters. This mechanic is called Megaclusters. If a new win forms then, there will be new symbols dropping down, to replace the winning ones.

Megapays is a random feature that will reveal a special symbol, a Royal between Ace and Nine. The following respin can bring that symbol, and with 4+ you can win a jackpot.

Two versions exist for the wild symbol, regular and golden. They’re both used as replacements for other symbols.

There is a chance for 1 or 2 Gold Wilds to appear, and if they do then they have a 1x multiplier initially, and it will go up by 1x after each formation of a cluster to which it contributes.

If you can get multiple Reactions in a row, all in a single spin, you’re going to receive 2+ free spins as a reward. For each additional Reaction beyond the 5th one, there will be 1 more spin added. For these spins, you’re starting off with the multiplier of the Gold Wild from the starting spin, and you keep taking it higher.

Reach 10x with that multiplier, to win 2 extra spins. The same happens at 20x, and so on.

Star Clusters Megapays can be impressive for a number of reasons, and I’d include the presence of four progressive jackpots there, though it gets better. You also have wins of up to 27,050x the stake that you can claim through its regular spins and features.

The four progressive jackpots have a Mega version as the most impressive one, and it resets at a minimum of $300,000, so that’s the absolute lowest value it can have. The Major, Midi, and Mini versions, are not as impressive.

As the usual downside, we have the fact that there will be High volatility associated with the gameplay of this slot. Fans of BTG’s slots should be used to it by now.

I liked that the RTP was fairly high, 96.27%, meaning that as difficult as it might be to play this volatile slot, at least you shouldn’t feel like you’re being robbed.

Star Clusters Megapays can be an adequate alternative to the popular Megaways slots, if you’re tired of those mechanics. It’s not going to be as fun to play as those games though, the Megaclusters mechanic just isn’t as fun.