Innovative, despite its use of 3 reels that you start with, Cyberslot Megaclusters is the second game from BTG to use the Megaclusters mechanic. It’s got a bit of a space theme to it, where you see various stellar bodies as its symbols, resembling asteroids of different colors. Not an authentic color for such an object, but it’s enough to give the game a modern look.

You will discover a total of 7 symbols with these asteroids/planetary bodies, along with a W logo for its wild.

It’s Big Time Gaming that’s giving us Cyberslot Megaclusters, and this is a developer with an excellent reputation for high quality content. It’s not their first Megaclusters title, and they’re better known for their Megaways engine, but it’s always interesting to see what else they came up with. 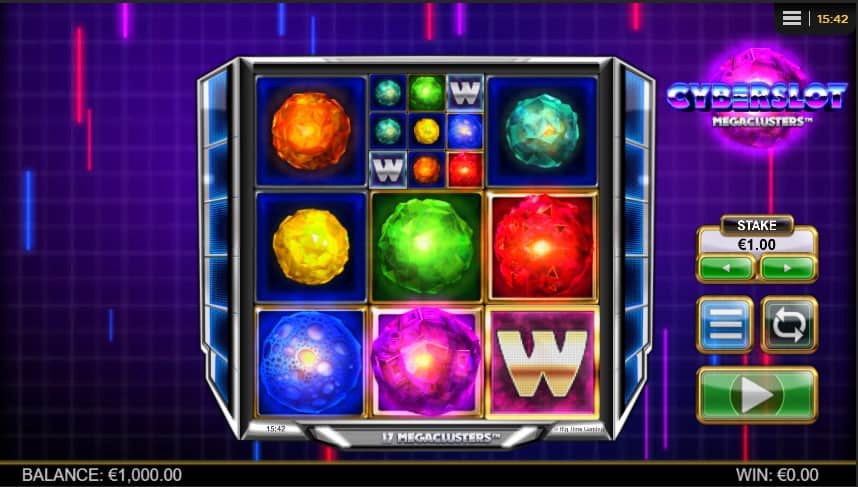 As with most modern games, you have to pick the wager for the next spin, but you don’t mess with any coins or denominations. You just pick one of the available bet values, the range used being between $0.20 and $20.

Cyberslot Megaclusters is a slot machine which requires that you form a cluster of at least 5 symbols of the same type. They have to be next to each other, touching horizontally or vertically. You get only 3×3 reels initially, but with one of the 9 positions getting 9 icons of a smaller size each round. You can then get additional smaller symbols in the other positions, as a result of reactions which trigger after you form clusters. Up to 25+ symbols can be part of these clusters, for maximum effect.

Following a winning cluster, meaning that 5+ matching symbols landed next to each other, a Reaction will occur. The symbols which were in the cluster will turn into 9 symbols of smaller size. The small symbols don’t expand further, but they do go away when they’re part of new clusters, and there will be waves of new symbols coming in to replace them. This can take the winning clusters further, and you can keep winning as part of the same spin.

You get several wilds to use, including a regular one, but also a roaming version for it. Roaming wilds stick around, but they will move in a different spot after Reactions trigger, adding to the multiplier at the same time. Once it moves away, its initial location gets 9 small icons instead.

In order to get the free spins to trigger, you need 12 reactions in a row, which isn’t going to be easy. The reward will consist of 6 free games, which will borrow the starting multiplier from the triggering spin. 9×9 symbols are going to be in use, and those can expand further as you form wins, giving the multiplier a boost as well.

Roaming Wild can have a multiplier of 10x, and they will also add new symbols of this type, once they get there, while giving the number of free spins a boost by 2.

Expect a slot machine which can pay incredibly well, the upper limit for its jackpot being set to 23,960x. The downside would be the resulting volatility, which will be high. On the other hand, the RTP is where you’d want it, at 96.54%.

Cyberslot Megaclusters is an impressive new release from Big Time Gaming, exactly what you’d expect from one of the most innovative developers of the last decade. The Megaclusters system has potential, but it remains to be seen if it will become as popular as the Megaways.