While enchanted forests are typically thought of as magical places filled with fairies and other unusual creatures, the accent in Shimmering Woods appears to be placed on something else. Rather than go for the living aspect, Play n GO chose gemstones to be the point of attraction in these unusual forests.

Shimmering Woods will deliver the same pretty image for the background, but you will find crystals growing out of stones there. Look at the reels, and the mix will be with a series of gemstones in the top positions, and the Royals in the lower ones. I didn’t find the resulting design as fun to look at, compared with other enchanted forest themed titles, but it’s not bad overall.

Hundreds of slot machines are available from the developer of Shimmering Woods, Play n GO. The company has a lot of different themes and types of features for you to choose from, so even if you don’t like this one, there is every chance that you will discover something else which works better. 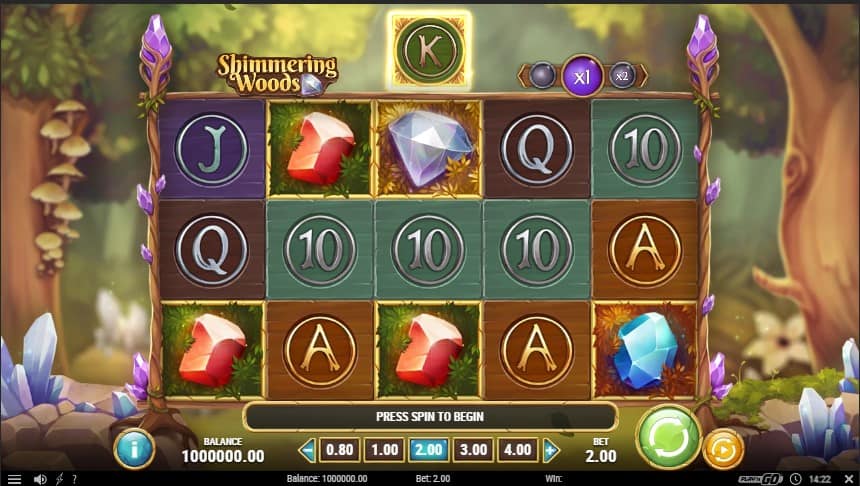 Shimmering Woods is played with a fixed bet, designed to cover the many ways to win which are included. $0.20 will be the smallest allowed bet, while the maximum bet can be worth $100. It’s entirely up to the player.

243 ways to win are found, in a setup with 5 reels of 3 symbols each. To get a win, you need matching symbols appearing left to right, on consecutive reels, at least 3 times. Once a win is formed, cascading reels trigger, and help bring additional symbols.

In addition to the cascading reels mechanic, mentioned above, there is an increasing win multiplier as well. It’s associated with the cascades, and will go up in value, as you keep getting new waves of wins. Up to 5x multipliers are obtained.

The diamond symbol is the one serving as wild, and it’s not hard to figure out. A W logo marks it, and tells us exactly what its role is. Use it as a replacement whenever it is appropriate, and it should happen often enough, particularly with the ways to win system. Should 3 to 5 symbols of this type appear, left to right, they get you paid directly, up to 3x the stake per line.

Splitting Symbols will trigger at random for each round. It selects a single symbol, and then it splits it into 2 symbols, if it lands that round. This improves the number of ways to win, potentially to as many as 7,776 ways.

Another gemstone, colored in orange, red and purple, and set in gold, will be the game’s scatter. These you need landing just once per reels, but on at least 3 of them, to get access to free spins. Since these can also split, you can get 3 to 6 in view, and receive 10 to 19 free spins, along with 1 to 4 splitting symbols for each round.

When retriggered, the free spins bring you 3 to 12 more rounds, along with additional Splitting Symbols.

With such a big number of ways to win, as well as increasing multipliers from the cascading reels, it shouldn’t be a surprise that Shimmering Woods can pay very well. 25,000x the stake is the top payout that’s possible.

I love that it’s a game with medium-high volatility, despite the big potential. RTP can be pretty good, at 96.20%, but it could also be at 94.20%, so check with the casino, before you play it.

Shimmering Woods offers big rewards, but its volatility doesn’t go to the same extremes, so it’s just the type of slot machine that I love playing. You might feel the same way, and I’m sure you can forgive the lack of fairies and enchanted creatures from its reels.