It’s about the fifth slot machine that we’re seeing with Hugo in the main role, so the cute troll has clearly been a popular addition to Play n GO’s collection of slots. Hugo Carts is the name of this latest release, and it’s got a theme that revolves around mining for crystals in the depths of the earth.

On the reels, you will discover a total of 20 symbols positions (5×4 reels). Hugolina, Hugo, and Scylla are three of the characters that will each land on its own reel and trigger respins. Dynamite scatters, Golden Crystals as wilds, along with Mining Helmets, Oil Lamps, Pick Axe, Shovels, and five top Royals (Ten-Ace), will be the rest of the symbols landing inside.

One of the giants of the industry, Play n GO is responsible for close to 300 casino games, and they have about 50 new ones releasing each year. Their slot machines will have great graphics, unique features, and rewards typically at 5,000x or higher, so there is always something interesting there for players to explore. The entire Hugo series is fun to play, so I’d recommend slots like Hugo, Hugo 2, or Hugo’s Adventure. 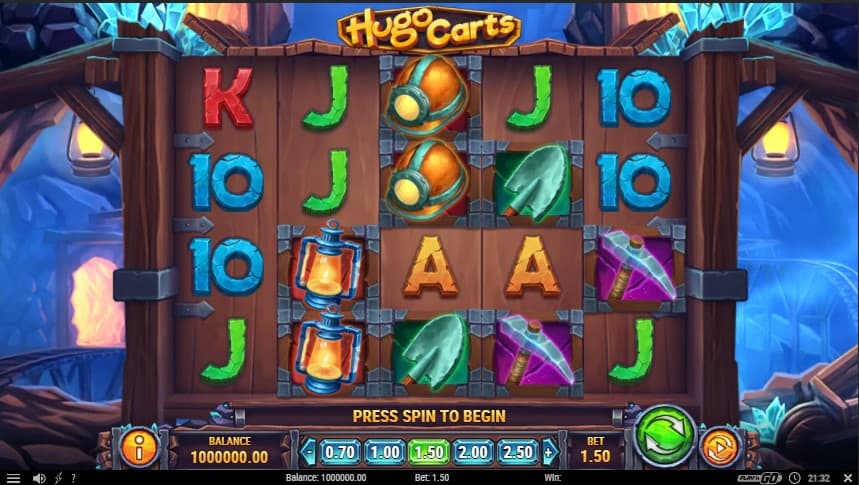 Check out the list of bet options listed at the bottom, and you can choose any of the values shown there. The smallest one is $0.10, while the highest bet is $100.

5×4 reels will be used, to deliver 1024 ways to win. What this means, is that every single possible combination is covered, there are no blind spots, like you would get in slots with only a few dozen active lines. As long as 3 to 5 matching symbols land on consecutive reels, left to right, you’re sure to have enough for a winning combo.

The three main characters will be used on the reels 2-4, each one reserved for a certain column. Hugolina will be the one on the 2nd reel, Hugo is in the middle (3rd reel), and Scylla is on the 4th one. Their appearance there triggers a re-spin feature with an active modifier.

A symbol that’s showing a bag filled with golden crystals, will be the one acting as wild. Besides acting as a substitute, it is also used for its own combinations, in which case you can get paid up to 10x the stake for up to 5 symbols.

What makes the free spins special, is that there is a random modifier chosen for them. One of the three characters will be activated each time. To get additional modifiers, you need to retrigger the feature with another set of 3+ scatters.

I think you’re going to really enjoy the potential rewards that Hugo Carts will deliver. 25,000x the stake might not be a typical prize for the vast majority of its players, but high volatility is the expected price to pay in a slot that can make someone rich. Its RTP can be as high as 96.23%, but it can be lower as well, since there is a range involved.

Hugo Carts is an excellent addition to a series that has gotten a lot of fans over the last couple of years. The mix of features, the cute graphics, and the big rewards, make this a good choice for many players.

Cat Wilde and the Doom of Dead