Rhino Rilla Rex appears to be a prehistoric-kind of slot machine, the type that would go back in time to an era when the dinosaurs still roamed the world. Either that, or it’s a Jurassic Park-style theme. In this case, the three creatures used as symbols and jackpots are the Rhino, the Gorilla (Rilla) and the T-Rex (Rex). The reels are dark green, and the surrounding graphics use the same coloring, so it’s not a very appealing combo.

As for what the symbols deliver, there are a series of gems in green, blue, or red, but those are the low-paying positions. The top ones rely on images of the three creatures, and they’re stacked.

The way a lot of other slots are, Rhino Rilla Rex was also created by two developers, Microgaming and Crazy Tooth Studio. Most of the actual work was done by the latter. Plenty of other examples of their slots are around, such as Diamond Force, Arctic Valor, or The Incredible Balloon Machine. 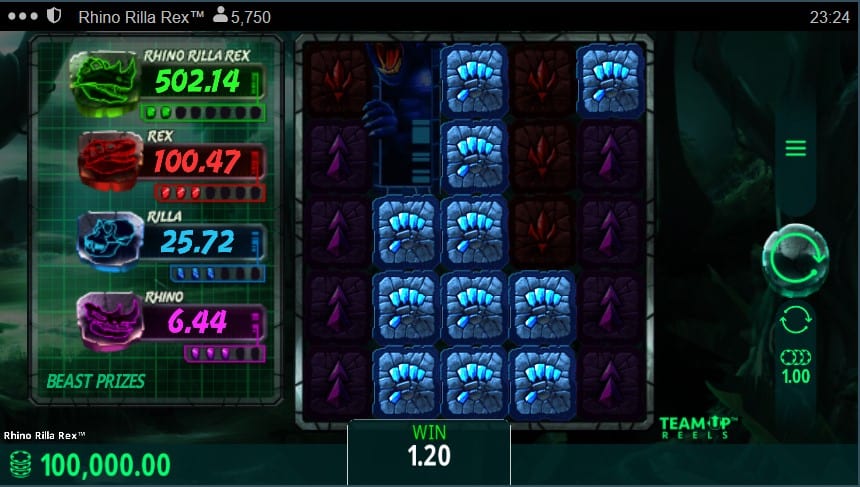 There is nothing complicated about the slot’s betting range. It starts from just $0.25, and then it goes only up to $25. As it seems, there are 25 coins inside, and their denomination goes up to $1.

The game area is getting 5×5 reels, and a total of 3,125 ways to win (paying both ways). It’s an interesting setup, with the ability to form combinations starting from either side, besides the fact that you get all those ways to win active at once. It uses stacked symbols quite heavily, so you can form a lot of wins at the same time, when luck strikes.

There is a wild symbol present in Rhino Rilla Rex, but you can only get it on the first or the last reel. Either way, it’s useful in getting you a head start with the formation of new combinations, starting from either side of the screen.

A Team Up mechanic is also present in this game, and it’s one of the main features available. You just need to get a group of 3+ wild animals fully visible. It gives you a spin in a new game area, where the animal symbols are united into a single one (a mix between the ones involved). This new screen brings tokens, multipliers of up to 5x, or prizes.

Any tokens that showed up, will be collected in special meters on the left side.

If there are stacked beast symbols visible on at least three reels, with one or more surrounded by a golden border, you get the bonus spins instead. During these spins, you can get more of them by landing special symbols that allow for this.

Collect enough tokens of the right type, as you progress through these features, and you may fill one of the four meters. You can get paid up to 500x from the top one, the Rhino Rilla Rex, but you need 8 special tokens for it. The others are Rex at 100x (7 tokens), Rilla at 25x (6 tokens), and Rhino at 5x (5 tokens).

Rhino Rilla Rex may end up paying a fair amount, even as much as 5,000x the stake. Still, the high volatility of the slot would suggest that a better jackpot would’ve been even better. The RTP tops out at 96.20%, with a couple of other lower options also included.

Rhino Rilla Rex manages to deliver some unique features, which might just be enough to bring players to it. It doesn’t attract in other ways, as the rewards are not high enough, and the graphics average at best.