If you ignore things like scurvy, or the fact that you’d have to live with dozens of unwashed sailors in close quarters, a pirate’s life can sound pretty exciting, though only when you’re thinking of the riches involved and the buried treasures that all good stories will mention. It’s a popular theme for a casino game, and NetEnt is especially adept at delivering great graphics, so Rage of the Seas is one to pay attention to.

The game sets the stage on the deck of a pirate ship, and it gives us only themed symbols on its reels, which is definitely a plus for it.

The top paying symbols deliver a total of four pirates, both men and women, following which we see a parrot, a hammerhead shark, an anchor, a gunpowder barrel, the ship’s wheel and a bottle of rum. Feature triggers will take the form of a Wild Kraken and a Boost symbol.

It’s NetEnt that worked on this slot machine, and this is the type of developer about which everyone can agree that they almost always deliver impressive graphics. It’s true here as well, and in plenty of their other slots. Some of their exciting new titles include games like Hotline 2, Dark King and Disco Danny. 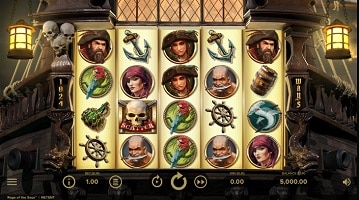 A very long list of bet values is provided in a separate menu, where the options which are listed go from $0.20 to $400.

In exchange, Rage of the Seas gives you 1024 ways to win, on 5×4 reels. To get paid, you need symbols of the same type (or wilds) landing on 3+ consecutive reels, beginning from the leftmost one.

The appearance of Boost symbols on the reels from the middle (2-4), gets you an expansion of that column, which will go from 4 to 7 symbols. This also triggers 4 Feature Spins, with 1 of 5 random features active. If the Boost symbol lands on a reel which has already been expanded, then you get an additional 2 Feature Spins (or 2 free spins if you’re in that mode).

If you happen to get those Boost symbols on all three reels at the same time, you will trigger the free spins, but only if you can get 3 to 5 scatter symbols as well. 5 to 12 free spins can trigger then, with 3 random features permanently active.

The 5 random features that the game can pick from, will include:

I think you will appreciate the game’s offer here, as a top jackpot of 27,440x the stake is not to be ignored. The payout can be very good, but the downside is that the risk is higher and the game can be quite volatile for the average player. Long-term, it is expected to have a 96.04% RTP, so it does alright on average.

Rage of the Seas offers the player a rich design, a long list of features that don’t feel quite the same as those from most slots, and once it adds the huge reward potential as well, it will seem like a pirate’s life is something that you were born for. Do keep in mind the higher risk involved as well though, this one’s not for everyone.

Rage of the Seas Slot Machine For Real Money Now: