Parthenon: Quest For Immortality will take us to one of the temples of Ancient Greece, which was dedicated to Athena, the goddess and patron of the capital. It incorporates a system with many ways to win, requiring for a large number of symbols to be present on the reels. The symbols are placed on the side of the temple, and this seems to be pretty much standard for Ancient Greek slots. There are statues of Zeus and Athena next to the game area.

As for what the symbols look like, some of these are going to be the expected Royals, between the Ten and the Ace, though with a Greek style for the font that’s been used. Other symbols are representations of various objects and creatures that are associated with Ancient Greece and its legends. We see on the reels images with a trident, snakes, boats, Pegasus, Medusa, but also others with the Free Spins logo or the Wild Fire.

Parthenon: Quest For Immortality comes from a major developer, a top 3 creator of games for the online casino industry, called NetEnt. Several hundred titles have been released so far, the majority of which will consist of online slot machines, and the average quality of these games is one of the highest around. They’ve made a name for themselves on the quality of their games, which is what you want from any developer. 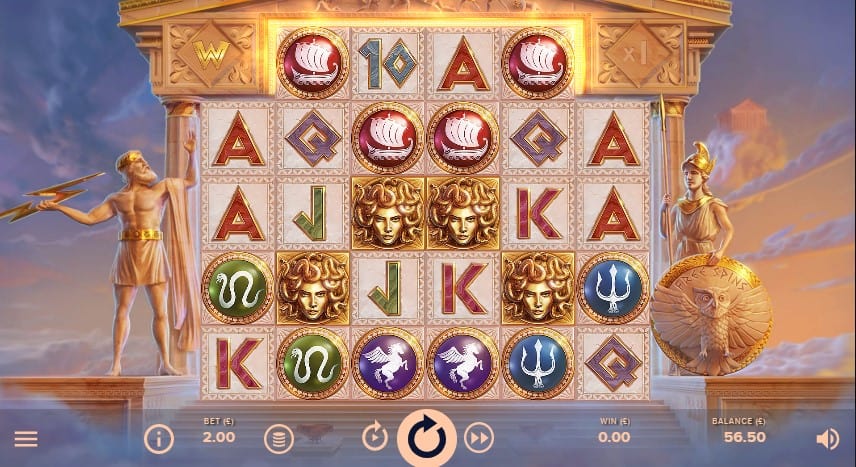 It’s a game area with 6 reels, and a large number of symbols, where there are 10,000 ways to win active (4-5-5-5-4 symbols). To create a win, you need 3 matching symbols landing on consecutive reels, starting from the leftmost one.

An often used feature of the last couple of years, the Avalanche is implemented in Parthenon: Quest For Immortality as well. It triggers through the formation of a combo on the reels. The game will then remove the symbols that already got you paid, and new ones will land and try to repeat the feat. Avalanches continue, if there are new wins formed.

Another interesting bit about the slot’s features, is the presence of a Wild Generation Zone, which is found at the top of the middle reels, the four symbols which stick out on columns 2-5. If any of the symbols found there is included in a winning combination, it is transformed into a wild, and then it remains there for the upcoming Avalanche, to be used in any new win that’s being formed.

As for what the wilds will do, they’re simple substitutes, that you can use for a regular combo, but not as a feature replacement.

8 to 20 free spins are triggered via 3 to 5 scatter symbols with the feature logo. You can retrigger them by collecting scatters once inside. The transformation of symbols into wilds will boost the feature multiplier by 1x, and the cap is at 20x.

There are a lot of ways to win, and regular combinations can pay up to 40x the stake, and that’s before you get the multipliers in the free spins mode. The jackpot is very low though, only 1,250x the stake, which is extremely disappointing since the volatility is high. RTP looks OK though, at 96.03%.

Overall, I like what they did with the game’s features, but there are some things about it that I’m not a fan of. Mostly, I’m referring to the smaller top jackpot, of just 1,250x the stake, way too low for a game that’s risky enough to target mostly experienced players.