Despite the title, most of the design in Phoenix Graveyard doesn’t have too much to do with the Phoenix bird. We do see it in one of the symbols, but otherwise this is a slot machine with a Gothic-style design, dark colors being used everywhere. You will notice the Medieval characters on its reels and the buildings from the background, but other than that you’re not getting much of a story.

Symbols start off with Royals, Gothic style letters from J to A. We then get the three premium symbols, with the minstrel, queen, and king. Phoenix Wilds and Bonus symbols may appear.

The creator of Phoenix Graveyard is ELK Studios, a developer that we’ve gotten a lot of enjoyable content from over the years. If you enjoy this sort of mix, with modern graphics and unique features, then you will love their work. Their older content is even better, since the RTP was 96% just a year or two ago. These days, their new releases all come with the RTP at 95%, so there is less of an incentive to give them a try. 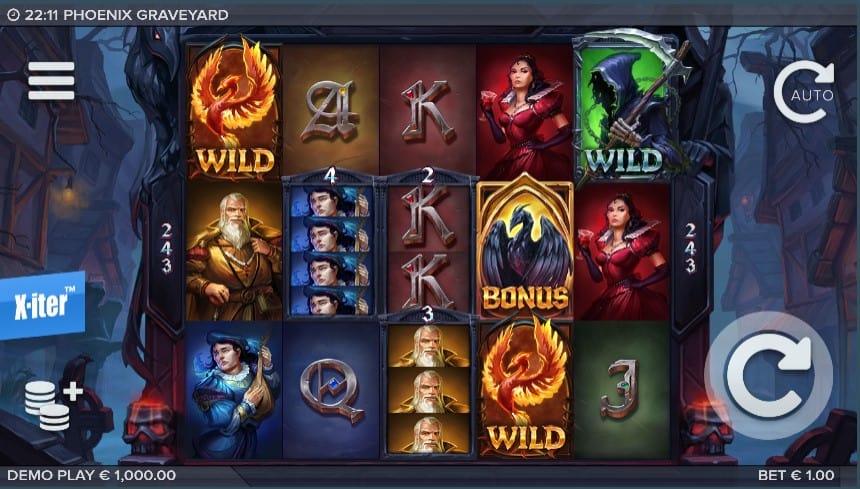 The typical setup for Phoenix Graveyard uses 5×3 reels and 243 ways to win. It gets better thanks to the Expanding Win Ways mechanic, since each symbol can turn into up to 10 others. More on this mechanic below.

As I mentioned above, a major part of the game comes from the Expanded Win Ways. Regular symbols can be sliced and turned into a gravestone. The number on it will tell you how many ways to win are present there. The expansion comes as a result of Sudden Death or attacks of the Grim Reaper.

You will find gorgeous Phoenix Wilds on the reels, symbols that act as substitutes and then jump to new positions during free spins or respins.

Sudden Death is a random modifier, which will slice symbol positions at random, giving you more ways to win.

Grim Reaper is the walking wild, which will land and trigger respins. During respins, it will do battle against Phoenix Wilds, and will slice premium symbols, for more ways to win.

If you happen to get 3-5 Phoenix Bonus symbols, you receive 6-10 free spins, along with 1-3 Phoenix Wilds. It can then be retriggered. The Phoenix Wilds are available throughout the free spins, and the expanded win ways are also going to remain.

Thanks to its many ways to win, as well as multiplier wilds, Phoenix Graveyard can end up paying very well. The developer promises a top jackpot of $1,000,000, which would be a 10,000x return for someone with the max bet active.

The downsides come from the high volatility of this slot, as well as the 95% RTP that’s used in its case.

Phoenix Graveyard has plenty of unique features, it looks good, and a prize high enough to make you a millionaire is also something that I’d find difficult to argue with. On the other hand, the 95% RTP and its high volatility will keep plenty of players from trying it out.