Katmandu Gold is part of a larger collection of slot machines from ELK Studios, which all have in common the presence of the word Gold in the title, along with a main character called Kane. We’re going all over the world alongside this adventurer, and in this particular game the target is Nepal’s capital. Not exactly a common theme for a slot machine, but that’s what makes it exciting to play.

The symbols you will get on the reels include the image of Kane, along with representations of Dragons, Tigers and Turtles, which are all fairly common in Asian-style games. The medium symbols give us four elemental logos (fire, wind, plants and water) and four of the top Royals (J-A).

It’s ELK Studios that designed the game, and this is a developer which has become fairly well known over the years. I recommend the rest of the Gold series as well, which includes titles like Tahiti Gold and Ecuador Gold, among others. 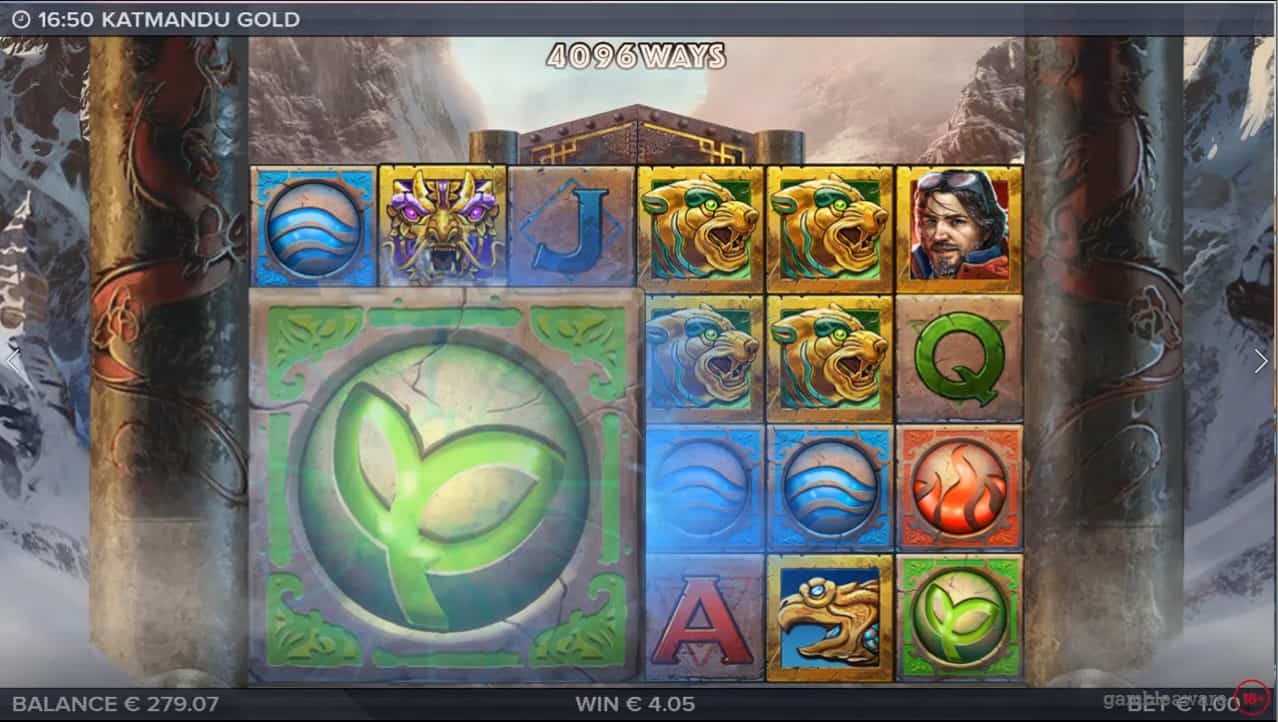 Deciding on the bet for the upcoming spin is easy, as the developer gives you a fixed number of bet values to choose from, the same ones as in every other slot from them. The range of the available bets is between $0.20 and $100. A bet uses 100 coins, so their denomination can go from $0.002 to $1.

In a game with 6 reels and 4 rows of symbols, we find 4096 ways to win. You will be forming combinations when 3 or more matching symbols appear on consecutive reels, starting from the leftmost one.

There will be wild symbols present inside, and these can be used in new combinations, provided that they’re on a reel where a new symbol could be used in a combo. You will not use these wilds as replacements for the feature symbols.

Whenever wins are formed, Avalanches follow. This removes the symbols which got you paid, and the new ones will have a chance of doing the same. As these Avalanches trigger, the reels start expanding. New rows are added to the top, and you could end up with double the initial game area, meaning 6×8 reels.

As a result of Avalanches, you may also get big symbols to land, and these are sized anywhere between 2×2 and 4×4, showing a single symbol in that area.

Scattered Bonus symbols, landing 3 to 6 times on just as many columns, gets you 10 to 25 free drops (free spins). It’s a feature that involves multipliers, which will go up for each new Bonus symbol that lands.

Expanding Win is a feature that requires the presence of a special symbol, which needs to be part of a win. The arrow which appears there, will show the direction in which the expansion occurs, replacing symbols with wilds.

Ice Climber is another feature that you can get, requiring Ice Climber symbols landing 2+ times. Those symbols will be replaced, along with any other symbols shown on top of them. If this happens with the Ice Climber on the 8th row, then a 9th row is added (the only way to get 9 rows of symbols).

I think you will love the potential of Katmandu Gold. 10,000x the stake is a payout that anyone would love to get. Even though the volatility is considered medium to high, there is a 96.20% RTP which tells us that long-term the game is considered fair.

Katmandu Gold does quite a bit, in its attempt to make the action interesting inside. The theme is rare enough in a slot machine, that it’s already a good choice, but there are some unique features and big payouts to be had as well.