There is an entire series from ELK Studios that will take us to different parts of the world. Kane is the central character of all these stories, and in the past he was part of games like Tahiti Gold and Black River Gold. An island from the Pacific Ocean is home to the action in this latest release, and we’re seeing remains of an old fighter plane that fell in a jungle forest.

The game area is fairly large, with 6×4 reels, and it’s giving us a number of decent symbols, though I wouldn’t place the initial four icons (Royals from J to A) in that category. The next four show us images of abstract representations of various objects (in blue, green, purple, and red). The four top symbols include three images of idols, along with the top-paying Kane.

Coming out of Sweden, Pacific Gold is a well known developer of slot machines. It doesn’t have the largest collection around, just 66 games released up to this point, but they’re still working hard, and slowly but surely they’re building up their portfolio. 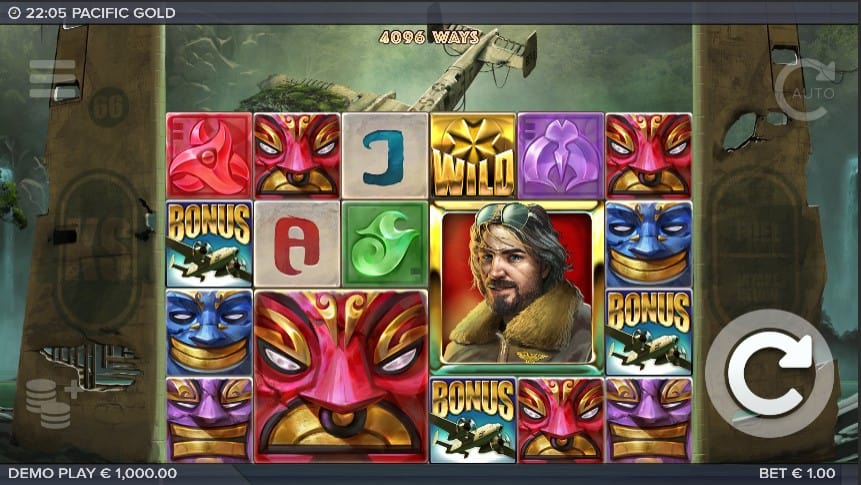 Most of the slot machines you will see from this developer will have the same betting range, of $0.20 to $100. It’s also the case with Pacific Gold.

Using 6×4 reels, Pacific Gold manages to give the player 4096 ways to win. It’s a large game area, and it’s not that difficult getting paid, since you just need 3 or more matching symbols that land on reels going left to right. All possible combinations are covered.

Among the special symbols that are found in Pacific Gold, the wild is one of the more interesting ones. It’s going to show up in four variants, ranging from 1×1 to 4×4 positions occupied. Regardless of its size, it’s a substitute that will assist new combinations in being formed.

Drops occur whenever you manage to form a new winning combination, with winning symbols being removed, and others dropping down to occupy available positions. As this happens, the reels expand by one row, and over the course of multiple drops it could lead to a game area of up to 6×8 reels, with 262,144 ways to win.

Power Stacks are regular-sized symbols, but they count as 4 symbols of that type. As it goes through multiple drops/avalanches, it becomes more powerful, counting as 2 extra symbols each time.

Pacific Wave is the name given to a horizontal stack of symbols, occupying up to 4 positions.

The Ghost Box, if it shows up, is used to collect symbols that are involved in wins. At the end, the box explodes and adds the winning symbols back to the reels.

You can receive access to 10-25 free drops (free spins), if you can get 3 to 6 bonus symbols to appear at the same time, even if they’re scattered somewhere on the reels. You get 6×4 reels initially, but the starting size of the reels will get a boost after each free drop that occurs.

You’re guaranteed access to a minimum of one Pacific Wave for each free spin. If a Ghost Box shows up, it will be sticky, revealing its collected symbols at the end of the feature.

Pacific Gold is just one of the many highly volatile slot machines that we’ve seen over the years. With 10,000x the stake as its top jackpot, it doesn’t do that well there, especially if we consider the risk one is taking inside. The 95% RTP doesn’t help it either.

Overall, Pacific Gold looks like a good addition to the Gold series, and ELK Studios did well by its players in most regards. I’m not a big fan of the 95% RTP though, that’s one area where it’s worse than its predecessors.