DJ Wild lets players live their EDM fantasy. Ever wish that you had packed it all in, and dedicated life to becoming a DJ? Life would have been a messy affair of Woman/Men, parities, drugs and drink. If the player wants to escape the mundane rat race and wonder, then this is the perfect slot for them.

ELK developed this slot. They are a Swedish company that make games for the mobile and desktop platforms. They are a small company, trying to make up ground on the big boys. Their previous titles are to be commended for their aesthetic design and original ideas. 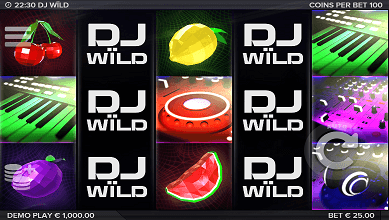 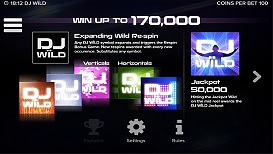 DJ Wild is a five reel slot. The first thing the player will notice, is the reels cover all of the screen. ELK gaming has made a commitment to mobile gaming and they optimise their games for the mobile platform.

Covering 100% of the interface is the kind of ideas, a company dedicated to mobile slots are likely to produce, because it makes perfect sense on a small touchscreen. It looks good on desktop too. It makes the buttons difficult to find. The Spin button is an opaque white circle, on the right of the screen.

ELK gaming should have made the buttons solid and had it disappear during the spin animation, because the whole see through thing leave a bit to be desired. On the other side of the interface, the player will find, the Bet and Settings buttons.

They are also opaque circle things. The intro sequence for this game, was a short film that showed some EDM hotspots around the world. It was really well done. This game also has its own soundtrack produced by a DJ from Stockholm, called Fantasia. The symbols used in the game are mixture of DJ equipment, instruments and gem/fruit symbols.

Pressing the Spin Button will spin the reels, and the player can adjust the bet any time the reels are not in motion. DJ Wild has 10 paylines but they pay both ways. This means that the first symbol of a winning line can be on either, the furthermost left or right reel. This makes DJ Wild a 20 payline game with lots of little wins.

DJ Wild has a Sticky Wild feature, which also expands. If the player lands the DJ Wild symbol, it triggers a bonus game. The mix intensifies, and the reels get a pink glow.

The players is rewarded a respin and further Wilds, fly past the reels and hover over them. If another Wild lands it will expand either horizontally or vertically. The player can be rewarded indefinite resins, leading to massive wins

The jackpot is won using the DJ Wild Jackpot Symbol. In the Sticky Wilds bonus game, all the reels can fill with Wilds, except reel three, because there are no Wilds on reel three.

Reel three does have the DJ Wild Jackpot Symbol. It is unlocked once all the other reels are covered in Wilds. If the player lands the jackpot symbol this wins 50,000 coins.

This is a great game, which really embodies the spirit of EDM. It does not have too many features but the Stick Wilds feature is a fun time. The two way nature of this slot, means that players are always winning. It is a great game from a relatively new company.