With its action being set in a city of the future, a huge metropolis whose tall towers are shown in the background image, Nitropolis does one more thing to both get the player’s attention, and to make things interesting. It relies on cute former pets for its various premium symbols, including here both cats and dogs of different breeds.

To start with though, you will find that it has four Royals on its reels, images which make them look like they’re painted on the side of black walls. Four logos which are representing the factions are also used, as middle symbols, and then we get the icons with the creatures for the top ones. Those show us Pug Thugs, Rouge Rats, Gritty Kitties and Dirty Dawgs.

ELK Studios is the company which has worked on Nitropolis, delivering once more an impressive design visually, and with plenty of features for players to explore. It’s a typical game for them in that regard, and they have plenty more titles which are feature rich and volatile. Some of their other popular titles lately, would include Grand Galore and Visitors. 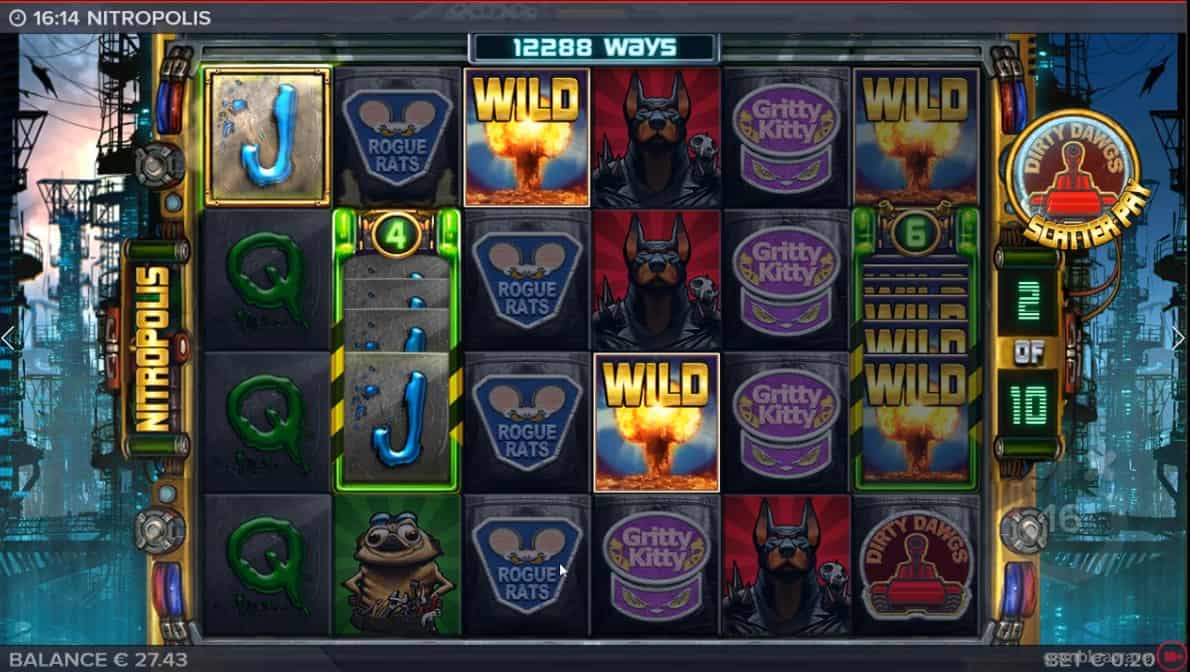 The standard betting system of ELK Studios is also used here. $0.20 is the minimum bet, while $100 is the maximum one. All bet sizes have the same 100 coins in them, only the denomination changes.

The game has 4096 ways to win initially, on 6×4 reels. You can expand the game area via Nitro Reels, but more on that below. The way to get paid is by forming combinations, for which you need between 3 and 6 matching symbols on consecutive reels, left to right.

The big feature of Nitropolis is based on a new mechanic from ELK Studios, called Nitro Reels. It involves double-stacked special symbols, which can have as many as 12 symbols of the same type inside. Though they occupy only 2 positions, they can then add up to 10 additional symbols on the reel, and this gives the number of ways to win a boost as well. This can happen on multiple reels at the same time, and you could end up with as many as 85,155,840 ways to win for a single spin, at least in theory.

You are going to be able to use Wild Nuclear Explosion symbols to your advantage, these being substitutes that can be used in combination with regular symbols. On their own, they pay as much as the jackpot symbol (5x the stake for a full line).

Whenever you form a win in this game, there is going to be a Winning Respin triggered. Both regular symbols and Nitro Reels will respin individually, when they’re included in a combo. For as long as you keep getting new winning symbols, the respins will continue.

You’re getting free spins as well, provided that you get 3+ bonus symbols with the Engine at the same time. Between 10 and 25 rounds are available, depending on the triggering symbols. The best improvement for it, is the fact that Nitro Reels become sticky when they land, so you keep using them and getting more ways to win.

It’s a good top jackpot, worth 10,000x the stake, fit for a slot machine which is supposed to have Medium to High volatility. Considering the millions of ways to win that can be available, it is a bit on the low side though.

Nitropolis looks like a fun option to try out, for anyone that’s looking for a bit of variety from the Megaways titles. It does feel different enough, but the top payouts are lower, despite the huge game area that is possible in theory.