You’re looking at Nitropolis 2, a sequel for another slot machine from ELK Studios. It’s taking us to a post-apocalyptic city of sorts, a place now inhabited and ruled by gangs of animals, former pets that no longer look all cute and cuddly. They’re racing on its streets, and they are split into four major groups. The symbols have three versions for each group, and they’re called Pest Control, Dirty Dawgs, Gritty Kitty, and Pug Thugs. We get an image of the animal in the top symbol, the group logo in the medium, and a Royal in the low paying category.

Nitropolis 2 is coming from ELK Studios, a developer that’s made a habit out of releasing high quality slot machines, though not that often. They appear to have about one new slot per month, and the quality is usually very good, both design and features being above average. 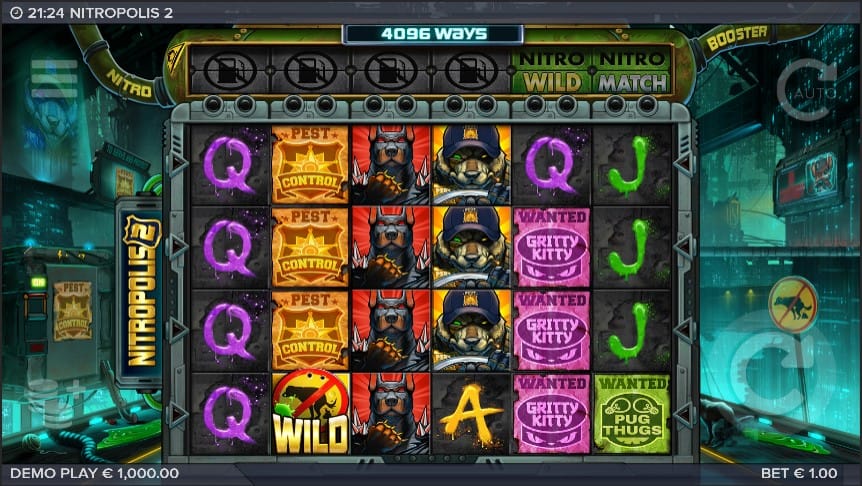 There is an X-iter option as well, which allows you to buy yourself access to guaranteed winning spins, bonus symbols, and free spins, with or without guaranteed Nitro Reels.

What you’re starting with, is a system with 6 reels, where you will discover 4096 ways to win. They pay both ways, and there are ways for the game area to expand, but more on the latter below.

Following the formation of winning combinations, the winning symbols are removed, new ones come down, and extra wins may form.

Nitro Booster is the name of a special reel, which you see at the top, spinning to deliver random modifiers. There are about 8 different ones that you can get, ranging from sticky nitro reels filled with wilds, to only high value nitro reels, additional symbols, respins, pay both ways, or symbol transformations to match nearby symbols.

There is a wild symbol that’s able to lend a hand, either as a substitute, or by forming its own wins.

Up to 25 free spins can trigger as well, but getting there requires that you have 3-6 scatter symbols with the Hot Rod, all appearing in the same spin. For this mode, Nitro Reels are sticky, so once you get them, they’re there to stay.

Nitropolis 2 is not going to deliver huge wins, but 10,000x is still a decent payout to look forward to. Some may expect more out of it though, since it can have such a huge number of active ways to win (over 100 million), and may be disappointed.

Volatility is medium, so based on how much risk you’re taking, the payouts don’t look that bad. Once you take a look at the RTP, you’re going back to disappointment, since it’s at only 95%.

Nitropolis 2 offers a lot to the player, particularly if you want exciting features and modifiers. I like the Nitro Reels system, but not in a slot with a 95% RTP. Because of that one aspect, I’d recommend it only as something to check out, not to play in the long run.