Are you curious about where humanity is going, and how we’re going to look like in a couple of centuries? Science fiction often tries to answer that question, and Illogicool is the sort of slot machine that fits into that category as well. The background image puts us onboard a human space ship, at some point in the distant future. We see astronauts at their consoles, sitting on chairs that are floating in the air with help from some kind of anti gravity technology.

The reels make it clear that it’s a game that is inspired by humans, as its two main regular symbols will show us a man and a woman, both wearing some kind of uniform. We then see a variety of objects that range from space ships, to ray guns, and computers. They didn’t make as much of an effort with the Royals, four of them being used in neon colors. Feature symbols are also deployed, including here the Troubles (Tribble-like creatures, cute and furry).

This one’s coming via ELK Studios, and it’s going to be a slot machine with decent potential and unique features, same as a lot of other games of theirs. More than 60 other slots are offered by this company, so if you enjoy their style, check out the rest of their collection. 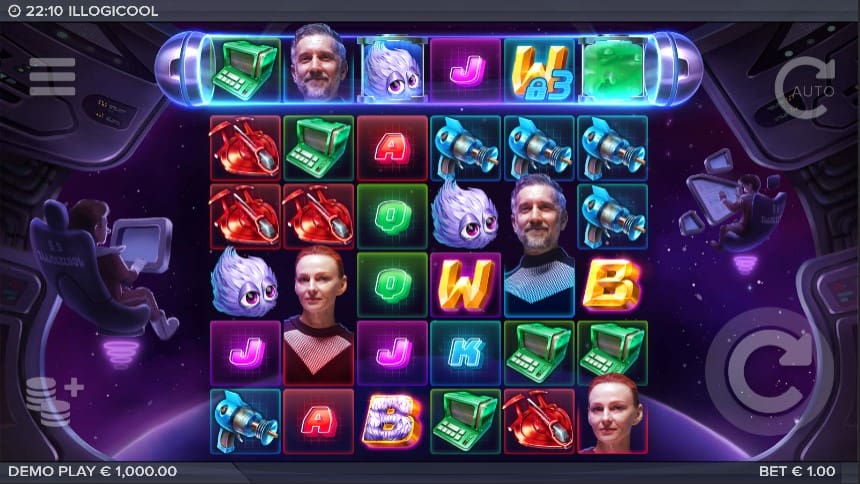 With betting strategies included, which you can ignore if you don’t feel like giving up control, Illogicool has the same betting range as every other ELK Studios slot I’ve seen so far. With 100 coins used, you’re spending between $0.20 and $100.

Illogicool will feature a setup that feels large, using 6 reels and 6 symbols for each one. At the top, there will be a row that is classified as the Cool reel. For that large setup, the slot manages to deliver 46,656 ways to win.

It’s the type of game to include dropping symbols, which is a mechanic that follows after the formation of any winning combination. It has different names in various slots, but they all work in a similar manner. The winning symbols are dropped from the reels. The available positions will be occupied by new symbols, and this can result in new wins, and then in additional drops.

There will be a Cool reel at the top, the 6th row of symbols, and this one is used to bring in both feature and regular symbols. The feature triggers will drop from this Cool Reel, to the main game area, where they become active.

Regular and locked wilds are present as well, and they act as substitutes. The locked ones remain in place for the next 3 wins.

A Monster Wild will expand on its reel, when it is part of a win, but it will stop if it finds a winning line or a feature symbol in its path.

Troubles are the hairy little critters, feature symbols that need to be adjacent to other similar creatures. They become tiny overlay symbols, so others can land in their present positions. They reproduce and spread to nearby positions. Once you get a losing spin, the Troubles are all turning into a single type of symbol, regular or wild.

Finally, you also get free drops/spins, via 3+ bonus symbols. You can get 10 to 25 rounds, and if there were Super Bonus symbols as triggers, then a multiplier of up to 30x is also added. Cool Reel now comes with additional multipliers and extra free spins.

While I enjoyed the top payout of up to 10,000x the stake, the 95% RTP of Illogicool isn’t a number that I can get onboard with. It’s a high volatility release as well.

Illogicool looks interesting, and ELK Studios has included plenty of unique features inside, to make it fun. The 95% RTP is the only one that bothers me, especially with so many other great slots giving you better odds.