A classic fruit theme might have been used in Bompers, but once you take a look at it, you will see that it doesn’t have a lot in common with older slots. The game area is big, but you start off with only 6×4 reels, where the symbols are arranged to look like piles of bubbles, some columns being placed higher than others, thanks to that style of arrangement. It almost looks like a pinball machine, if you check out its background image, and the flippers shown to the sides.

Well established by now, ELK Studios is not a developer with a lot of titles under its belt, but it’s slowly getting there. I like when companies take their time with slots, and make sure they get them right, and it definitely looks like ELK Studios does that. 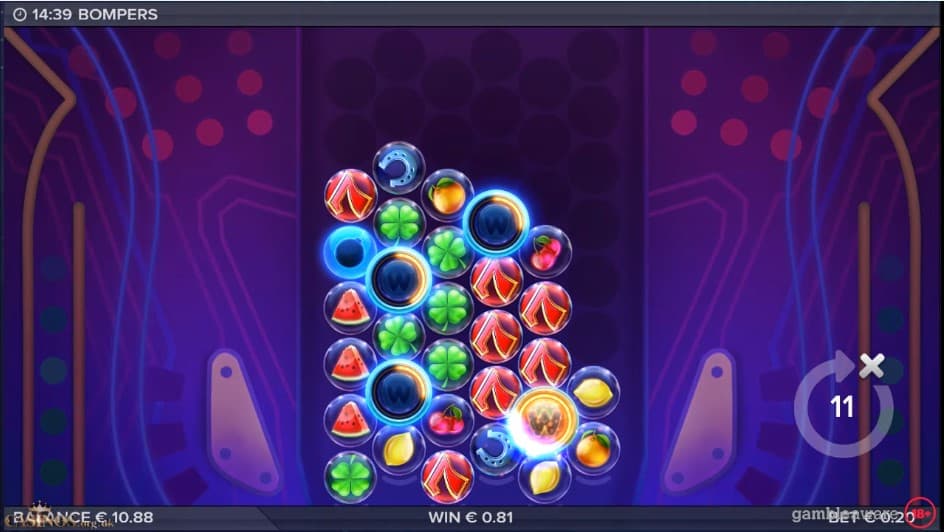 You may pick whatever bet value you can afford using over a longer period of time, and the developer offers a range between $0.20 and $100 for this.

Bompers starts you off with 6×4 reels, where you get a total of 4096 ways to win. You then get more ways to win, as the reels expand, and you could have up to 262,144 ways active eventually.

One of the mechanics which are important here, will revolve around the Avalanche. This will trigger after each win, and it will involve an explosion which will remove winning symbols from view. It will also allow new ones to come in, while giving the game area a boost, with one extra row of symbols. Automatically, this boosts the ways to win as well. Once the round is over, the game area resets.

You will have a W logo as a wild inside, so naturally there will be more regular wins coming in the long run. It’s useful, even though it’s not especially impressive.

Bompers are marked positions, which may show up in reel positions. It happens for up to 5 positions, before the round begins, and they remain there until the spin is over. Any wins obtained through those, will determine the collection of the symbols found there, and a meter will slowly fill. Get it filled, to transform the Bomper and make it a sticky wild.

7 free drops, or free spins, will be obtained whenever you get the B logo scatters on the reels, in random locations. There is the option to retrigger the feature as well. You get up to 5 Bompers as the feature start, and they remain there for all free drops. Eventually, they turn into sticky wilds, once their meter is full.

Mystery Bombs are present among the game’s features, and they can be used to transform their positions and nearby ones, into a single random type of symbol. Get two to overlap, and the position in question is transformed into a wild.

Shooting Star is another one to look into, a symbol which will try to travel upwards, and eventually it will transform 7 symbol positions, with up to 3 wilds among them.

5,000x, or up to $500,000 cash, is what we’re being promised in Bompers. Highly volatile, the game manages to return only 95.80% of what’s wagered to its players, so even in the long run, there will be better options for you to try, particularly if you’re fond of keeping your money.

Bompers offers enough unique features, and it’s making some room for itself through them. I just wish it had a higher RTP, so it could truly compete with the many other good slots available right now.