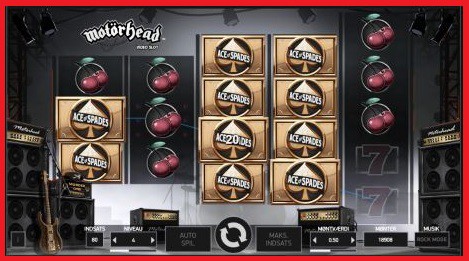 Good things come without a warning. Fasten your seatbelts for an experience worth remembering.

One of the most exciting music themed online casino slot, Motorhead, has been launched by Netent as part of the “Netent Rocks” Tour. Preceding the massive triumph of the other music themed slots named after Jimi Hendrix and Guns N Roses, the Motorhead slot promises to be one of the most loved slots resembling the success of the historical band itself.

As the Motorhead slot woos over enthusiasts from all over, it is indeed judicious to say that this third music themed slot from Netent is nothing less than amazing. Something that can be immediately noticed while playing the slot machine is that the grid reel arrangement is unique and different from all the other slots launched by Netent. The online slots are similar to those of the Dazzle Me slot which got a lot of attention from the users as being customized in a way to make people win more.

PLAY FOR FREE HERE BELOW: 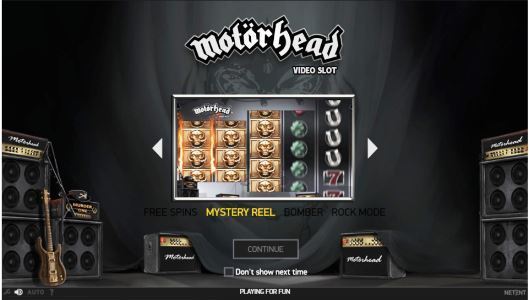 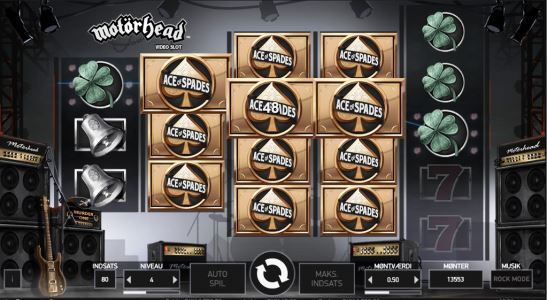 Incorporated with 5 reels and 76 pay lines, the slot is a brilliant tribute to one of the greatest bands who apologetically lost their front member a while ago. The Motorheads had a fan base worth writing about as they filled quite a few stadiums for their performances. Every one of those fans would be equally excited about the slot as it is a fitting tribute to the greatness that Motorhead achieved.

The slot follows a pattern very much alike to the success of the band by creating a ripple amongst avid fans. The slot can be played on the desktop, smart phones and on tablets. The fact that the slots can be played on smart phones and tablet is a plus for everyone who wants to play the game on the go. The personalization is done to cater to all the fans of Netent in general and the lovers of Motorhead in specific. The slot caters for all casino lovers as it accommodates people from just 20p in the reserve to those with a swashbuckling 200 pounds to throw on every spin.

The slot starts off with a well designed warning to prepare the users for what’s to come. The warning which adds to the aura of unconventionality associated with the slot is something that increases excitements to extreme levels. The slot is designed just like the fans of Motorhead would want it to be.

With an amalgamation of a background stage and amplified speakers, the slot is very much like the Gun N Roses one, the only difference being that the Gun N Roses slot wasn’t nearly as dark as this one as Netent have made it fall in parallel to what the users perceive of Motorhead.

In addition to the overall theme and the background, the occasional extremes remind the user of how cool Motorhead used to be. Occasional soundtracks featuring different Motorhead hits remind the players of the rock bands brilliant past.

Having talked about the success of Motorhead as a band it is pertinent to start off with one attribute of the game that reaches out to most to them. Anytime during the game, the player can press the Rock Mode icon and hear four of the best songs that Motorhead released. The songs that would be played are Iron Fist, Ace of Spades, Overkill and Killed by Death. No doubting the fact that they have chosen 4 of the best that Motorhead ever released.

Every time during the spins during the base game, one or more of the reels would play the role of a mystery reel. The Mystery reel would contain further mystery symbols that would be used if the need arises. As soon as the reel halts spinning, the presence of any mystery symbol would mean that they would transfer into any other symbol besides the scatter symbol which can lead to bigger and better winnings.

Perhaps the most interesting feature within the game is the free spins feature. The free spin feature rewards the player with 10 spins when 3 scatter symbols end up on the 3rd, 4th and 5th reels. While using the free spins, the reels can contain both wilds and mystery symbols which can initiate a series of wins. One of the drawbacks is that the free spins when used do not lead to further re spins, but still great winnings can be had if a free spin leads to a wild.

All these features add to the overall excitement of the game. The different features ensure that the adrenaline is rushing throughout the game and that there is not a single moment that the player can miss. The Mystery Reel and the occasional free spins prove that there is a lot up for grabs on the game.

Overall, the game creates a good experience by creating a strong link between the slot and a tribute to Motorhead. The game carries the legacy of the music legends theme by continuing on the trend set by the Guns N Roses and the Jimi Hendrix slot. Considering that we’re all huge Motor Head fans, a bit of bias might spring up but Netent has struck all the right notes within this slot.

The Phantom of the Opera