In a slot machine that looks like it has a bit of an Asian influence in its design, we find a story that revolves around an ice dragon. The huge creature is shown in the background, colored in white and light blue, a fierce dragon that’s sitting on top of a mountain. The game area is in front, and it’s huge, with 7×7 symbols present.

Legend of the Ice Dragon relies on a rather underwhelming mix of symbols, especially if we’re looking at its four card suit icons. The others look better, showing crystals, blue flames, purple crowns, and red eyes. A W logo will be your wild.

This slot machine comes from one of the top creators of such games, a company called Play n GO. Easy to find at most casinos, and with dozens of new titles to check out each year, it’s a great choice if you want a lot of variety. 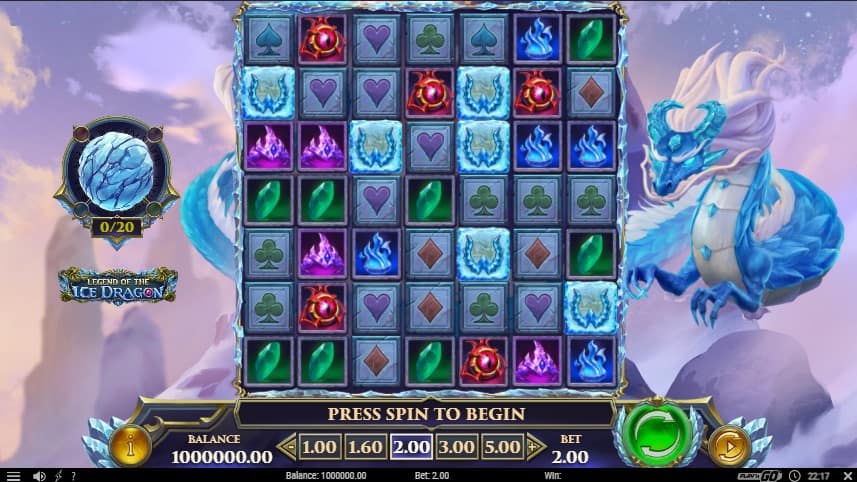 Between $0.20 and $100 can be used for each round, to trigger it. The betting range is standard for Play n GO.

Legend of the Ice Dragon is played via a Cluster Pays system, on 7×7 reels. A cluster needs to have 5 to 30+ matching symbols grouped up, to pay you.

After you form a winning cluster, the round continues with a cascade, where the triggering symbols are removed, and then replaced with new ones. Additional clusters could form, and more cascades would trigger then.

The W wild can show up on the reels, as a substitute. When removed through cascades, it leaves behind an Ice Frame in its place. Get another wild to appear within that Frame, and the multiplier for it will go up by 1x. It only becomes useful during certain times, and only for that spin. Up to 8x multipliers are possible in the Ice Frames.

Playing the game can lead to random features as well, not just regular ones. There are three possible events that could trigger:

The main feature of the game is the Ice Crystal Charger though. Collecting winning symbols across multiple cascades, you can get various modifiers triggered.

Legend of the Ice Dragon pays at most 6,000x the stake, and the time when this is most likely to happen is during the Dragon Blast feature, when multipliers can be applied. High volatility characterizes the experience you’re likely to get inside, but that is fine if you can find a casino that uses the highest RTP of 96.29%.

Legend of the Ice Dragon does a lot to keep the player busy, and it seems like there is always something going on. It’s fun to play, and there is potential for big rewards as well, though nowhere close to the most volatile games around.

Bull in a China Shop