It’s from Nolimit City, and it’s got their own version of a superhero themed design (it’s about villains actually, and they’re called Infectious 5). Infectious 5 delivers comic book style graphics, pretty much exactly what you’d want from such a slot machine. The quality is very high, particularly when it comes to the superhero and villain symbols that are used for the premium icons. I wouldn’t say the same thing about the selection of Royals, which look a lot tamer by comparison.

It’s not a new developer, but even though it’s been around since 2008, Nolimit City only has 49 slot machines released currently. I’ve been impressed with the potential of their slots though, and especially with the xWays system, that you can find in this game as well. Other popular games of theirs include Thor: Hammer Time and East Cost vs West Coast. 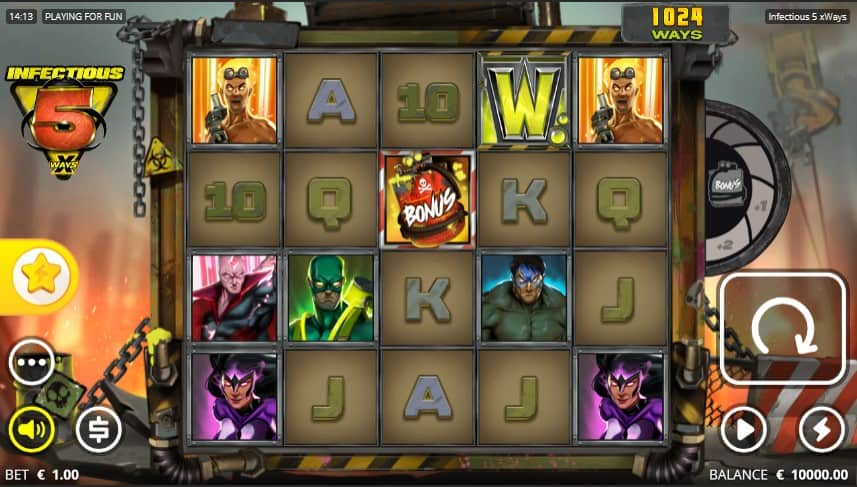 Pretty much as expected, the betting range is available for you to choose from, with the lower and upper limits being at $0.20 and $50, respectively.

In exchange for the wager, regardless of its size, there will be a game area with 5×4 reels & 1024 ways to win initially. It can expand by quite a bit though, with up to 110,592 ways available on 5×8 reels. This is the xWays system at work, and we will talk more about it next.

xWays symbols can land on the reels at any point, and they act as mystery symbols of sorts, which are transformed into a regular symbol, at random. It’s more than just a mystery icon though. It turns from 1 to 2-3 symbol positions of the same type, which gives the game area a boost (along with the number of ways to win). This allows for up to 5 expanded reels to be in play, with up to 110,592 ways active on them.

Regular wilds are going to be present, shown with a yellow W logo. They’re acting as substitutes for regular symbols, a standard role that you’re probably familiar with already.

Should you get a wild and an xWays icon at the same time, then the Infectious bonus comes next. It starts with the usual choice of a random symbol to appear in 2-3 positions in the xWays icon, but then it also spreads to other positions occupied by that particular type of symbol. They all turn into xWays icons, and go from 1 to 2-3 symbols.

Another major feature, will come via the scatter symbol, but depending on how many symbols appear, there are two different bonuses to get.

Free Spins which require 3 or 4 scatter symbols in view. You choose between the following:

Toxic Hazard: has 9-10 free spins, where up to 5 wilds are randomly placed on the reels, guaranteeing the Infectious feature when an xWays icon lands.

Lock n Load: gives you 7-9 spins, with sticky wilds that could have up to 3x multipliers. Once again, the infectious xWays are guaranteed if you get an xWays icon.

And then, there is the Mayhem version of the free spins, which you can get only if all 5 scatters are present on the reels during paid spins. You can also collect scatters during free spins, to get it.

12 spins with Toxic Hazard Mayhem, with a single golden version of the Infectious 5 symbols being selected, to appear in xWays icons.

10 spins with Lock n Load Mayhem, with a single golden symbol chosen from the Infectious 5, and once again with the guarantee to get this symbol during xWays.

An impressive jackpot, worth 55,555x the stake, is a possibility in this highly volatile release. Its RTP is not as good, only 96.02%, but it will do.

For players with a big tolerance to risk, a slot like Infectious 5 is going to be an impressive option, with a lot to offer, but with high odds of something going wrong as well.