It’s a slot machine with a World War 2 story, where the members of a U Boat (German submarine) are main characters on its reels. There are several features that are inspired by the theme and the ship battles of World War 2, plus a good mix of symbols that are appropriate for the story. It’s a comic-book style design, which fits the story quite well. Das Boot was originally a movie that was released in 1981.

The first five symbols, the low-paying positions, show off green-colored Royals, between the 10 and the Ace. The next five, premium symbols, give us images of the ship’s crew, from kitchen staff, to radio operators, sailors, and officers. The xBomb Wild and the Sonar Bonus symbols will also show up at times.

A developer that’s been making a name for itself recently, Nolimit City has released over 50 slot machines so far. Das xBoot is just one of several memorable games we’ve seen from them, and I’d include here names like Mental, Infectious 5, San Quentin, or East Coast vs West Coast. 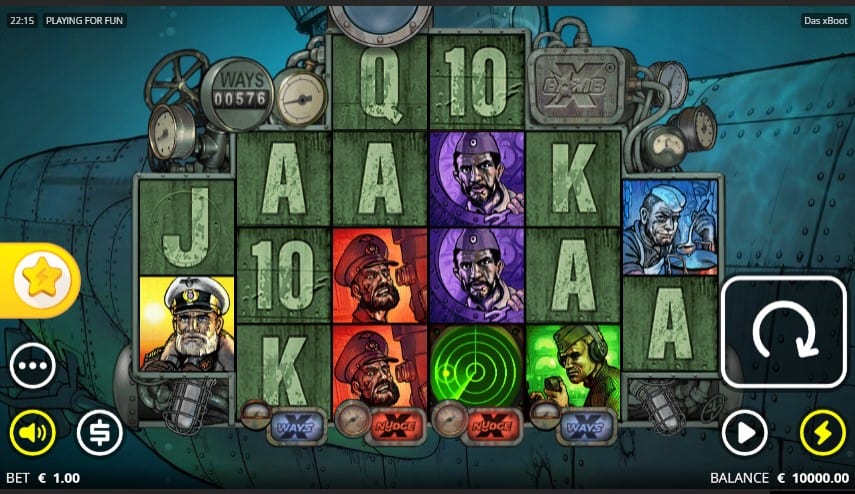 $0.10, the minimum bet that you can use each round, will be enough to spin the reels. If you’re looking for a better payout, you need to increase the bet, and get as close as you can to the maximum amount allowed, $100.

First, a word about the xWays system. It relies on certain special symbols that can land on the middle four reels (2-5). Those symbols will show up to 3 symbols in a single spot, all of the same type. This way, you get more symbols for the columns where this happens, and a larger number of ways to win.

xNudge Wilds can show up stacked, though since it’s nudged to cover the full reel, it acts more like an expanding symbol in the end. The advantage it has over it, is that the nudges boost the multiplier for the wild by 1x, each time it happens. The downside is that only the largest reels, 3 and 4, can get these wilds. You add up multipliers, if there are several wilds that are involved in your wins.

A second type of wild is the xBomb, which explodes and boosts the multiplier by 1x for all wins, after which it gets turned into a regular wild. That explosion will take away the symbols that weren’t part of combinations.

Among several submarine themed features, you will find the Silent Hunter, Wolf Pack, and Torpedo Launch.

Sonar scatters land on the middle four reels, and with 3 you get 8 Silent Hunter free spins. In this mode, the 3rd reel is 8 symbols high.

If you land 4 Sonars, then you get the Wolf Pack bonus, where you need torpedo wilds to bring down xWays symbols and increase multipliers for them. Complete a torpedo, to reveal the xWays symbol.

Torpedo Launch is a feature that requires the Periscope Wild on the 3rd reel, and two symbols of the same type on the first two reels. Firing at enemy ships successfully will help the wild expand through nudges (with 1x wild multiplier boosts), and the round’s multiplier to get a boost by 1x as well.

Not only has Das xBoot been designed to be capable of paying well, but it has actually done so already. Top jackpots of up to 55,200x the stake have already been recorded, in a highly volatile slot though, where the top RTP level is 96.03% (the second one is 94.02%, and the casino picks the one they want to use).

Das xBoot looks impressive on most counts. I found its graphics enjoyable and appropriate for its story, the rewards are huge, and there are loads of cool features that you can explore.