Remember Gulag does just that, it reminds us of one of our planet’s saddest times in history. The gulag was a forced-labor camp, from the USSR, and the times of the Cold War. This Nolimit City slot does a good job setting up the atmosphere inside. You’re looking at dark graphics, with lots of gray and barbed wire.

The initial five symbols are the Royals, in Slavic script, so you might not figure out what they mean immediately. The premium ones give us a Bear, an Einstein-like character, a spook, an officer, and an image of Stalin (top symbol).

One of the developers that have done a great job at getting themselves noticed in recent years, Nolimit City offers about 60 slot machines at the moment. It’s an incredible collection, with a huge number of special features and huge rewards. Slots like Deadwood, San Quentin, or East cost vs West Coast, have gotten the attention of players. 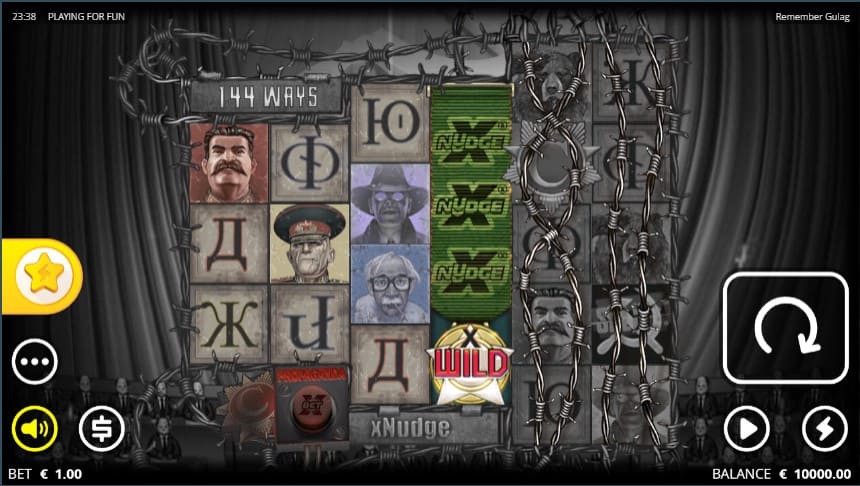 To start playing this slot machine, pick a bet for the upcoming round. $0.20 is the smallest bet available, while $100 is the largest one.

Using the Propaganda Bet costs you 20% extra, but you are guaranteed a scatter and the 5th reel is always active.

As I mentioned above, reels 5 and 6 are locked when you start playing the game. You unlock reel 5 with 1 scatter, and the 6th reel if there are 2 scatters visible.

Regular wilds are available on all the slot’s reels, ready to be used as substitutes.

xWays symbols may land on reels 1 and 2. They show a random symbol, and they can count as up to 3 symbols.

xNudge Wilds could show up on reels 3 and 4. It’s a stacked wild, and it is nudged to be fully visible. The nudges will each boost the multiplier of the wild by 1x. The multipliers are added up, if more than one wild contributes.

xSplit Wilds can appear on reels 5 and 6. They show up, and they split the symbols from their left or right, while also doubling their number. A multiplier is added, if a split occurs for the same symbol more than once. This even applies to the other feature symbols, like the xWays and xNudge Wilds. It also turns scatters into expanding wilds. Once they’ve done their job, they transform into two regular wilds.

The Gulag Spins may trigger if you have 3+ scatters in view. Different variants are available if you have 4 or 5 scatters. Character symbols may have different multipliers that they apply, and the number of spins varies as well. The game area switches, so the taller 5-symbol reels are first, and the 3-symbol reels are last.

Gulag Spins: comes with an increased multiplier, which could even double the total amount collected at this point.

You can upgrade the feature, by collecting 3 more scatters along the way. You then get the All Aboard version, with all characters getting win multipliers activated.

The absolute highest reward that you can claim, and become an Oligarch in the process, is worth 30,000x the stake. You can expect a highly volatile slot, and I’d recommend you look for a casino that uses the 96.08% RTP. There is a second one at 94.37%, which is to be avoided.

Remember Gulag is just as impressive as the rest of Nolimit City’s collection. As they got us used to, it will pay incredibly well, it has lots of great features, and it’s very well designed.