We review a lot of games. And while a large number of them are great, they usually stick to a familiar formula. Trying something different is usually something developers avoid doing unless they’re certain it’ll pan out. That’s the exact strategy Play’n Go decided to use for Honey Rush! It may seem a bit weird with its hexagonal shape and special features, but we’ve seen them all before.

That doesn’t detract from how well the software provider made this slot, however! Using a hexagonal playing field for a game themed after bees was a brilliant move on Play’n Go’s part. Other elements of the visuals don’t really stand out. The background looks nice, but it doesn’t make you pause and stare. Same thing with animations! They’re good, but not great.

Available special features include the Rush meter and symbol cloning in form of three different Colony bonuses. You also have access to sticky Wilds with attached multipliers.

Play’n Go is an iGaming veteran, having been around since the mid-1990s! And while they never reached the same heights as NetEnt and Microgaming, they never fell behind, either. The team not only remained independent all this time, but continued to expand and grow. Today, they have five studios in Sweden, Hungary, Malta, the UK and the Philippines, giving them a properly global presence! 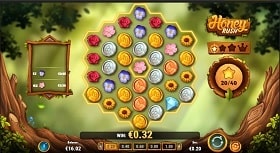 The board is arranged in a hexagonal shape. As such, a traditional payline setup is impossible. Instead, wins are awarded by collecting five or more identical icons in adjacent positions. Keep a close eye at the centre of the playing field, as that symbol will be used for the Colony special features.

Going for a minimalistic user interface was the right call by the developers. That said, we have to wonder if Honey Rush might have taken it too far! Everything except the spin button and the status bar is hidden in the menu. The bright white and yellow combination within the menu itself also needs a bit of work. You can set your total bet using a slider, between $0.20 and $100 per spin.

Interestingly enough, the betting and Autoplay sections are now on the same page in the menu! Play’n Go must really like sliders, because we use them to set everything. Number of auto spins, win and loss limits, as well as a single win cap. You can also make Autoplay stop on any win, or if the Rush Meter is charged.

Most of the icon designs fit the bee theme. They’re either flowers, or coins that depict bees, the hive and a drop of honey. Really, it’s just the diamond that’s a little bit out of place, but that’s something we can forgive. Like everything else graphics related, they’re good, but not great. They lack that little spark required to make something truly memorable.

Every winning combination disappears from the hexagonal reels. It leaves empty spaces, which other symbols fall down to fill. Meanwhile, brand new icons appear on top, ensuring the reels are always completely filled. This cascading reels mechanic allows for multiple wins at the price of a single spin! It’s an integral part of this slot’s design. As without it, the next bonus couldn’t function!

Said special feature, of course, being the Rush Meter. The meter is charged by winning symbols, but you will usually only score five to seven. It’s thanks to cascading reels that players will be able to fill the meter, and unlock the next bonus on the list.

The first three activations of the Rush Meter trigger the Drone Colony bonus, and add a sticky Wild to the reels. Each Drone Colony is more difficult to activate than the previous, requiring double the amount of winning icons. Upon reaching level four, you get a Queen Colony special feature instead! What these Colony bonuses do is that they take the central symbol, and replace all icons around it with that same symbol. Drone only creates a seven icon cluster, while Queen fills the whole reel!

You can also randomly get the Worker Colony on any non-winning spin. It can create a cluster between seven to fifteen icons.

Sticky Wilds only appear after being activated via Rush Meter. They remain on the board until re-spins end. Sticky Wilds have multipliers attached, increasing the cash prize of any win they are a part of.

This high variance game has a jackpot worth 9000x your total stake. Honey Rush’s RTP is 96.50%, which is above the current industry average.

The graphics are good, but they failed to leave a lasting impact on us. However, the hexagonal reel shape and all the fun special features that Play’n Go used more than made up for that! The mouth-watering jackpot will have us spending a lot of time trying to uncover the beehive’s mysteries. We hope to see you there!