You’ve probably seen loads of Ancient Egypt themed slot machines already, at least if you’ve been playing at online casinos for a while. However, Hand of Anubis manages to look quite different from all the others, and that’s because the inspiration for it seems to come from death and how it fits into their religion. You see an all-black design, with a few touches of color coming from its symbols. Otherwise, it’s a much darker look than I’m used to seeing in this category, and I love it.

Hand of Anubis has a few notable features, such as the Soul Orbs in several colors, Pharaoh Mummy as a bonus symbol, or skulls of Anubis. A total of 10 regular symbols are used, with the first five being the Royals painted on black slabs of stone. The top 5 are various symbols that represent deities, starting from Horus, Eye of Ra, and so on, until the Ankh.

Hacksaw Gaming is the creator of Hand of Anubis, and this is going to be a developer that’s got quite a few online casino games already. A majority of them consist of scratch cards, but they have a bigger focus on slots lately, and they already have three dozen titles out, many of them quite impressive. 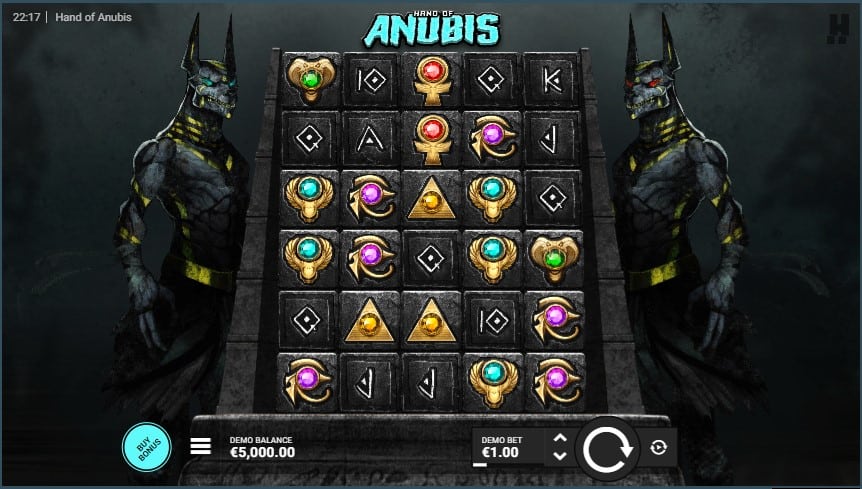 You can place a bet in Hand of Anubis that is somewhere between $0.10 and $100. You decide the exact amount which will be used, but it has to be one of the values available in that range.

The game area is large, with 5 reels of 6 symbols each being used. You’re going to use Cluster Pays, and so you are required to get matching symbols grouped up, at least 5 of them connected horizontally and/or vertically. To get the most out of these wins, you’d need clusters of 11 or more to form.

The first thing which happens, once you form a cluster, is that the cascading reels trigger next. The game takes away the winning symbols, and then allows new ones to drop in the available positions. Should new clusters form, you will find that the cascades keep going as well.

Two types of Orbs are present during regular spins, in blue or red. While they act as substitutes, these Orbs also have the role of absorbing the power of the round’s wins, while also boosting their value with multipliers. Red Orb multipliers are improved by 1x for every winning symbol, while Blue Orbs get a boost by 1x per winning cluster. All multipliers will reset at the end of the spin. They multiply each other, if they’re both applied.

There are scatter symbols which can land 3-4 times, giving you one of two bonus games as a result:

A top prize of 10,000x the round’s wager will be paid in Hand of Anubis. The slot’s RTP goes up to 96.24%, while the volatility is considered High.

Hand of Anubis offers the player a pretty good mix of special features, interesting ones that you don’t get somewhere else. The payouts are just acceptable, but they work if you pair them with a high-enough RTP.