Kalamba Games have mixed the fantasy theme and the treasure angle, and this is the slot machine that resulted. Goblins & Gemstones has goblins dressed up as bankers, in suits, and administering a large fortune comprised mostly of piles of gold coins, though the title’s gemstones are also part of it. You see the vault’s contents in the background, while the black reels hold a number of symbols.

Those symbols have half a dozen Royals for the bottom positions, along with keys, a balance, three goblins as bankers, along with treasure chests, key holes, and the three types of gemstones which can be collected.

Kalamba Games, the company behind Goblins & Gemstones, has been founded in 2016, and they’ve since released over 50 slot machines. Among their popular titles, games that you might want to check out as well, I’d mention titles like Fire Eagle, Dino Odyssey or Mammoth Chase. 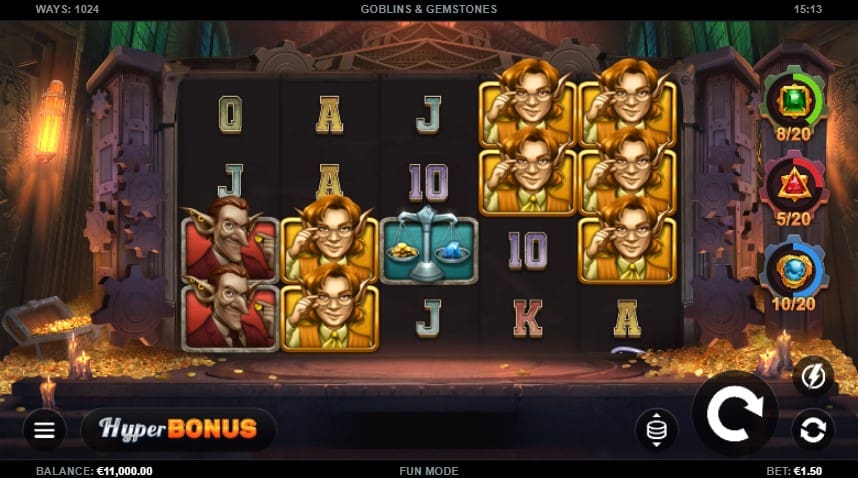 All ways to win are active, regardless if you go for the minimum bet of $0.50, the maximum one of $50, or any of the others found in-between the two.

Featuring 5×4 reels, Goblins & Gemstones has 1024 ways to win. To get paid, you need a group of 3+ matching symbols, landing left to right on consecutive reels.

One of several features which Goblins & Gemstones has inside, the Collection Spins are going to trigger as a result of your accumulation of gemstones in special meters. There are green, red and blue variants for these gemstones, and just as many meters for them to be added to. They are each associated with a different type of extra feature, which will be active in this mode.

Another feature will involve the frees spins, which require three scatter symbols with the Keyhole. The free spins can have as extra features the Scatter Split (10 rounds), Paired Reels (7 rounds) or Expand n Lock (8 rounds).

Scatter-Split is a feature which can trigger for free or Collection spins. It uses a randomly selected symbol and gives it the ability to pay as a scatter, and it will also have variants where it counts as 2-3 symbols of that type, even though only one position is occupied.

Expand N Lock will add symbol positions of a certain type, at the top of random reels. This adds to the number of ways to win, and gives you better odds of forming combinations of that type.

As for the simplest feature available in Goblins & Gemstones, that would be the Treasure Chest Wild. Use it as a replacement symbol, provided that it’s not doing it for a feature symbol.

You’re going after some truly impressive top wins in Goblins & Gemstones. They’ve announced a potential jackpot of 38,890x the stake, which is great even for a high volatility title such as this one. They made sure to keep the odds decent in the long run, as the 96.30% RTP tells us.

Goblins & Gemstones looks like a promising game for a fan of high volatility slots, adding big enough rewards and some decent features, so it should give you plenty to do while you’re trying your luck with it.