Looking at its theme, we’re not seeing the most inspiring story in Egyptian Tombs. Ancient Egypt themed slots are a dime a dozen, and the symbols chosen for its reels are also the ones we’re used to seeing. On the other hand, it has a good design, with small symbols that are relatively high quality, particularly the ones that also have bigger value.

Starting from the bottom, we have four symbols with the Royals first, very simple ones, apparently made out of stone, showing the Jack to Ace letters. The next four symbols, of high value, will show the Ankh, Bastet, Horus, and Cleopatra. Moving on to the features section, there is the Scarab, an Eye of Ra Wild, along with its scatter version. Additional symbols are used during Super Spins, showing variants of the Horus, Cleopatra and Ra symbols.

This is a joint production from Microgaming and Snowborn Games. This partnership has brought a few other slot machines in the past, with names like Miami Glow, The Vault, or The Bounty. Microgaming casinos are the only ones that will carry this game. 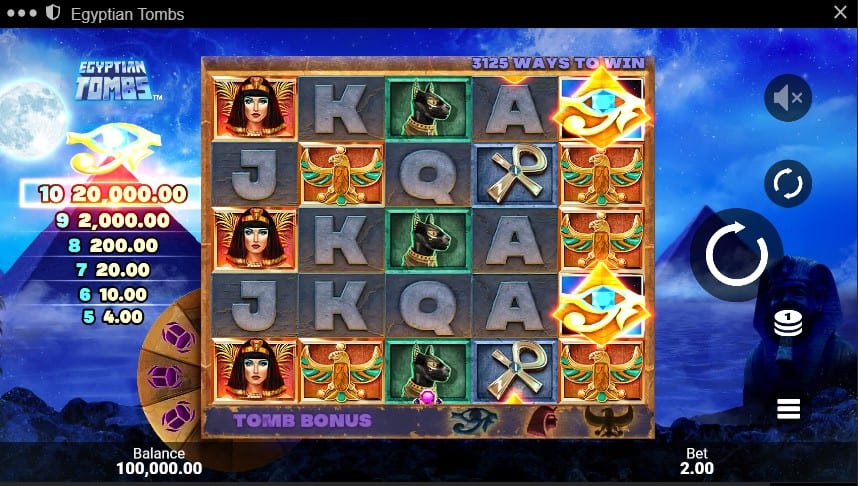 Every single slot with ways to win, is likely to have a betting system that requires you to pick the total amount directly. You don’t mess around with the number of lines, coins, or denominations. Egyptian Tombs does the same, and you pick the wager that works, between $0.20 and $24.

In exchange, the slot offers 5×5 reels and 3125 ways to win. There are no fixed lines, and instead it accounts for all possible combinations, and gets you paid. The requirement is just to have 3 or more symbols that match, landing on consecutive reels, and starting from the left side.

Tomb Bonus is a major feature, that’s going to require a special Scarab symbol landing anywhere on reels  1, 3, and 5. In this new mode, you will spin a Wheel of Fortune, to find out how many free spins will be triggered.

You receive anywhere between 8 and 50 free spins, with the chance to retrigger the feature and get another set of spins, down the line.

Super Spins are rounds that can trigger randomly, but with better odds of coming to you during the free spins. In this mode, there are additional symbols on the reels, with variants of Horus, Cleopatra and Ra. The extra Ra icons are used as wilds.

The Ra symbol is useful in another way, as a scatter of sorts, that’s going to get you paid when it lands enough times. 5 or more will do that, but you need all 10 in order to win the big prize, which is worth 10,000x the stake.

The Ra Wild is another one that should be fun, but you only get it during Super Spins. It’s either a substitute, or it forms its own wins.

The ultimate target of Egyptian Tombs, is going to be a 10,000x top jackpot. Given the wagers allowed, you could win up to $240,000 cash, all from a single spin. The experience will feel highly volatile, but at least we’re seeing the right RTP, at 96.18%.

Egyptian Tombs has both pros and cons. While I’m not a big fan of Ancient Egypt slots, there are just too many of them that use the same story and symbols, I think that this particular game was well made. It’s got some unique features, it can pay very well, but that also makes it a bad choice if you’re a casual player, and you’re not looking to take big risks.