Horror and the Victorian era seem to be a match made in Heaven. It’s not a guarantee that your scary story will be successful, but people seem to like the combination a lot! Combined with an excellent art-style and fluid animations, A Dark Matter will quickly worm its way into your heart. If that happens, you might need the assistance of the charismatic Nathan Highmore, too.

While it’s clear that something has happened in this dark place, you’re never told what. As you play the slot, you will see teases as to the nature of whatever is haunting the town. But even then, it only appears with Wilds under specific circumstances. If you’re bold enough, you can make this mysterious thing work for you. But get careless, and it might swallow you up!

This game has two special features. The first are stacked Invading Wilds, where Wilds can appear stacked in reels two and four. If they appear stacked, the Wild will expand to an adjacent reel, turning it fully Wild, too. There’s also free spins, during which you can get a 2x multiplier.

The talented team at Microgaming has been part of the iGaming industry from 1994. In that time, they’ve helped shape the industry in many ways, including the largest online casino payout at that time. In more recent years, the software provider has taken more of a managerial approach to slots. While it experiments with things like virtual reality roulette, it has partnered with several smaller studios to make its games. As such, their offering of releases has been much more diverse, though not always as high quality as we’d like.

There’s surprisingly little information available for Slingshot Studios. They’ve formed in 2016, but seem to have launched their first slot in 2018, under Microgaming’s banner. Since then, they’ve made several high quality games, improving with every iteration. We can’t wait to see what comes next! 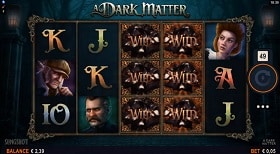 You play A Dark Matter on a 5×3 board with 5 fixed paylines, which pay both left to right and right to left. Players cannot turn individual paylines on or off. To change your wager, you have to adjust coins per line and coin size. As such, bets can range between $0.05 and $50 per spin.

Slingshot Studios uses a distinct layout compared to other Microgaming partner studios. We like it for the most part, but we’re not big fans of how menu heavy it is. If you want to make any drastic changes to your wager, you have to open the menu. Same goes for looking at the paytable and Autoplay.

Speaking of Autoplay, not a lot of options here. You can set up to 100 spins to be played automatically, and that’s it. There’s no way to set win or loss limits, or a single win cap. Definitely something the developer can easily improve on.

And did we mention how awesome the symbol designs are? There’s not much to the playing card royals, that much is true. But each of the human icons has had a lot of work put into them to make them look distinct and different. Not to mention the creepy blob tendrils appearing when Wilds appear fully stacked! A definite improvement over other Slingshot Studios slots.

Wilds can appear fully stacked on reels two and four during regular gameplay, or super-stacked during free spins. When Wilds cover the entire reel, they will also spread to the nearest adjacent reel, turning it Wild, too. This increases the odds of winning big, so make use of it as much as possible!

Collect three Scatters in the second, third and fourth reel to win twelve free spins. Any additional Scatters will award an extra turn. During free spins, if both reels two and four are fully covered with Wilds, the third reel will also turn Wild. This win will also award twice the money it usually would!

A Dark Matter has a high volatility, and a jackpot worth 2400x your total stake. This slot’s RTP is 96.18%, which is above the current industry average.

We were quite happy with this game! Slingshot Studios has been drastically improving in nearly every aspect with each slot they’ve released. A Dark Matter is no exception. It looks beautiful, and the special features are great fun. We only wish the payouts were a little better. This is a high volatility slot, after all. If they want to compete in the big leagues, they have to increase the jackpot!