As reviewers, Asian themed slots tend to elicit two types of emotions from us. A slight despair as we see the same symbolism re-used over time and time again. And genuine, pleasant surprise when one breaks the mould and exceeds our expectations. Divine Lotus falls into the latter! It’s made by Thunderkick, and draws obvious inspiration from their previous games. It doesn’t copy them, however! Instead, it adds a new twist, giving players something new to look forward to.

We knew we were in for something wonderful when we first saw the background image. It combines traditional Asian architecture and a peaceful Zen atmosphere with an otherworldly view of floating islands. There’s just something undeniably magical about seeing waterfalls falling from the edge of the world and through the clouds. The artists have truly outdone themselves!

Divine Lotus has quite a few bonuses! There’s the usual free spins special feature. During it, you can make use of another bonus! Collect more Scatters to fill the meter on the left. When the meter is filled, one symbol is removed and is replaced by a Scatter. Also be on the look-out for mystery icons, which can transform into any high value symbol!

Thunderkick launched its operation in 2012. They were formed by a strong core of experienced developers, brimming with cool new ideas! The results showed themselves immediately, as the software provider spiked in popularity. Today, you can find their slots on hundreds of websites and well respected online casinos. No game comes with a guaranteed seal of quality. But made by Thunderkick might just be the closest thing to that. 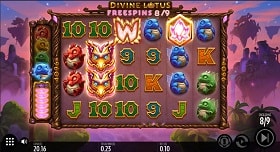 You play Divine Lotus on a 6×4 board with 4096 ways to win. With the Ways to Win system, there are no individual paylines. Instead, you’re awarded cash prizes when you collect three or more identical icons, starting with the leftmost reel. You can bet between $0.10 and $100 on each spin.

It speaks volumes to how well the developers designed their layout initially. Since 2012, we have not seen any changes to the user interface! It has remained elegant and easy to use throughout, and makes Thunderkick slots instantly recognizable.

Of course, if they were to make some changes, we’d suggest starting with Autoplay. Right now, you can only set the number of auto spins. You can play up to 5000 spins automatically. You can also set if Autoplay stops on bonus activation. That said, there is no way to set a win or loss limit, or even a single win cap. Minor nit-picks in the grand scheme of things, but important for long-term play all the same.

Symbol designs looks fantastic! The fierce dragon and the little baby hatchlings look really cool and unique. Playing card royals look like they’re made out of dragon scales, which is a nice touch by Thunderkick. And all the special icons which activate special features look visually distinct from the regular symbols. That makes them that much easier to spot and get excited for!

Collect three or more Scatters to win two free spins. Any additional Scatters will give you an extra free spin, meaning you’ll almost never be stuck with just two extra turns. During free spins, a mystery lotus meter will appear on the left side of the reels. Each time you fill the meter, it replaces a high value icon with a Scatter. It also grants one more free spin.

Outside of free spins, the game also offers mystery symbols. The way it works is super simple. When they land, all mystery icons will transform into the same high value symbol. That said, the mystery icon cannot transform into a Scatter.

Divine Lotus has a high volatility, and a jackpot worth 8709x your total stake. The slot has an RTP of 96.14%, which is above the current industry average.

We’re quite impressed with how this game turned out. It took inspiration from Thunderkick’s own Pink Elephants, and made something new with it. The core gameplay will still feel familiar to fans of that slot. But Divine Lotus’ inclusion of mystery symbols changes up the gameplay slightly, making it feel fresh and modern. A fantastic game from Thunderkick, and one we recommend checking out.