A combination of Bushido and Sushi, two of the most popular things that Japan is associated with, have been blended in this brand new release from Gold Coin Studios and Microgaming. Bushi Sushi does have elements from both, but mostly I’d say that it’s the sushi side that influences it, and you can see it in most of its symbols. Cartoon-style graphics were deployed inside, well enough detailed, but not quite as modern or interesting as we’ve seen in other slots.

Bushi Sushi delivers images of a Yin Yang like icon for the scatter, an expanding wild which shows us a Samurai Sushi, along with four high-paying regulars (all of them variants of sushi) and four low-paying Royals.

Microgaming is the big name under which you might see Bushi Sushi listed usually, but the game wouldn’t have been possible without Gold Coin Studios, an independent studio which worked on its development, and provided it as an exclusive for hundreds of casinos belonging to the network. This partnership has also brought us slots like Animals of Africa and Aquatic Treasures. 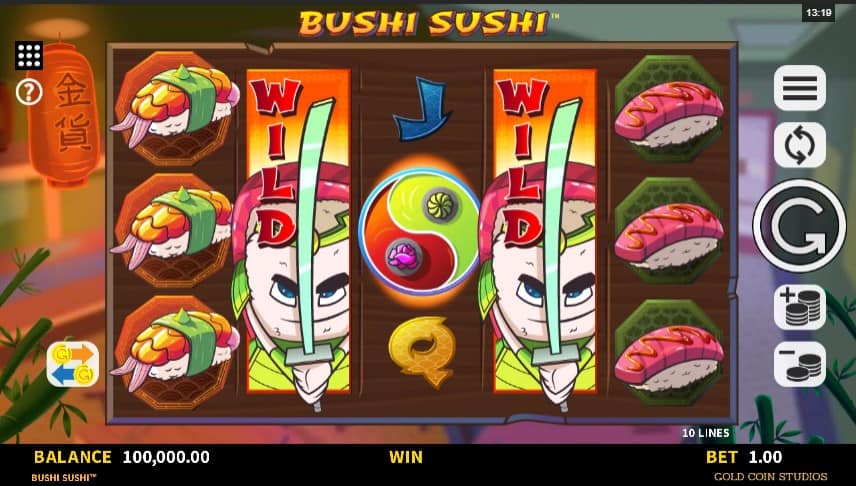 In exchange, this slot will deliver 10 active lines, which are used to form combinations both ways, so it’s not quite as volatile as you’d expect. Besides, there are only 2 feature symbols and 8 regulars, so 10 in total, and the odds are decent overall. You will get paid whenever 3+ regular symbols of the same type land starting from one of the two sides, on consecutive reels and on the same line.

A piece of sushi, turned into a samurai, is what you’re going to see in the wild symbol. Though you get these only on reels 2, 3 and 4, they expand and take over the entire reel, and this makes them very useful. Should they appear on several connected reels, they expand to form a single image on all of them, so it ends up taking over up to 3×3 positions then.

A Yin Yang-like icon, which looks more like a bowl with two sauces, will be the game’s scatter symbol, and the free spins trigger. All you need, is for 3, 4 or 5 of these symbols to show up simultaneously, but on consecutive reels and starting from either side. You get 10, 15 or 20 free games in exchange., with higher odds of getting wilds to show up, and with a chance to retrigger the feature as well.

You don’t get much from Bushi Sushi, it’s just not that type of slot machine. 40X the stake is what the top symbol will pay, which means that 400x is the ultimate reward when filling those reels, or 800x if it pays both ways for 5-symbol combinations.

Low-medium volatility characterizes the gameplay of Bushi Sushi, which tells us that it’s the type of game that everyone can give a shot, it’s not going to drain your funds immediately. As for the Return to Player rating, at 96.06% it’s doing a good enough job for an online slot.

Bushi Sushi looks like a good game to try out, for anyone that’s enthusiastic about Japan and its culture. It blends two elements which might not go well together, but ultimately I consider it a slot about food, not samurai.