SunTide appears to be themed around summer. Like the small rodent in Groundhog Day, this slot is predicting the upcoming summer, for the northern hemisphere at least. It is set over the ocean.

A bright and vibrate, orange colour scheme, is projected behind the reels. Microgaming has not bothered with the specifics, and this slot’s theme is somewhat open to interpretation.

SunTide is a new slot developed by Microgaming. They are a veteran of the online slot industry, and were one of the first companies to try their hand at online gambling. Microgaming started the world’s first online casino in 1994.

This is quite a claim to fame, love their games, or hate them; the whole industry has felt their influence. They have released over 800 titles since. Their games are renowned for exceptional gameplay, but are let down by their graphics, and aesthetics. 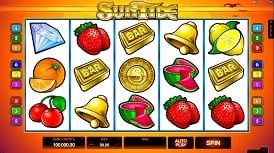 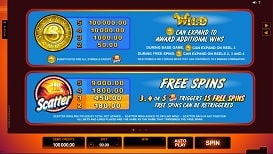 SunTide has a bright vibrant background image, in colourful orange. It shows the sun sinking into the ocean. The game’s design is not very nice. It has colourful payline boxes down the side of the reels, which look ugly and dated.

There are very few animations, for example, when the player makes a win the symbols flash into an out of the screen, and a thick, primitive, payline is drawn through the reels. Developers have stopped doing this. The symbols need to spin and light up, really just do anything, which keeps the game exciting. It is a 5×3 slot and the game’s controls are housed under the reels.

There are nine paylines in SunTide, which is not as bad as it first sounds, remembering this is a 5×3 slot. Logically if there are less symbols then there will be less paylines.

The game is played by placing a wager and then pressing the Spin Button. The player wins if they land matching symbols across adjacent reels, which agree with the Paytable.

The players bet must be set before the spin, because whatever is entered will be deducted from the player’s bankroll, when the reels are spun.

The higher the player bets, the bigger they will win, or lose, because wins are multiplied by the bet to determine currency value. For more information about betting, paylines, and symbol values, the player should check the Paytable, which is found by pressing the Info Button.

SunTide has an in reel feature for the player to watch out for. On the third reel there is a coin symbol which is an expanding wild. If it lands on the reels, it will expand to cover the whole reel, and substitute any symbol to make a win, except the scatter.

The game also has a free spins feature which is triggered by landing three scatter symbols anywhere on the reels. It is hard to miss this symbol, which has scatter written on it.

In the free spins mode the player is give 15 free spins to try and make bank. Microgaming has helped a little, by including the expanding wild symbol, but they placed it on all three middle reels to increase the chance of make wins. There is also a 3x multiplier on all wins in the free spins game.

This game offers a maximum payout of 1,222x stake. This is a decent win, but it is not that exciting, unless the player happens to win it at maximum bet. In the free spins game, factoring in the multiplier there are bigger wins available.

SunTide is an average game. There are some decent winnings and a great free spins game, but these are qualities held by every slot ever. SunTide is ugly, and while the features redeem it to an extent, there are too many fantastic games out there to be wasting money and time on a title, which Microgaming has not allowed to flourish.