The theme of a game tends to matter in a lot of cases, but for a game like Book of Gods, it’s not really going to be that important. The developer, Big Time Gaming, has implemented enough unique and high volatility features, that players will give this slot a try no matter what kind of story it tells.

It’s a good thing too, since the game doesn’t do much of an effort in building up a story for you. It’s Ancient Egypt related, we easily get that, and the action happens in the region of the Nile, a fertile land. You can see the pyramids from the inside of a temple or house, and there are beautiful decorations all around the reels.

The Egyptian gods appear to be the focus of the game, though they’re not represented quite as they’re shown in other slots, and so you might not recognize some of them. The red Horus is one of them, while others are shown as green, blue or purple gods and goddesses. The Book of Gods is one of the main symbols, a feature. The other six are going to have the Royals, letters and numbers that aren’t particularly interesting to look at.

As a new developer, Big Time Gaming had to do something to stand out, and they seem to have picked high volatility games and cool unique features as their go to thing. They translate their slots in 20 languages and they’ve been releasing a small but impressive collection of ultra-high volatility slots lately. Book of Gods, Donuts, Bonanza or Extra Chilli are some of the fan favorites right now. 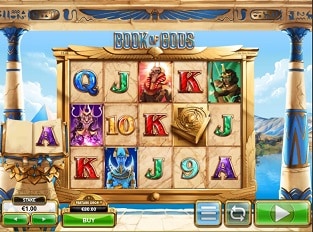 A Stake option, which you can use from the bottom left corner, will allow players to pick the total bet value for the next round. The values range between $0.10 and $40, and that amount will be considered when the payouts are calculated, the line bet really isn’t important here.

It’s not a game with the MegaWays system, so Book of Gods offers another unique feature, which we’ll explain below. It doesn’t influence what the player has to do though, you still just need to click on Spin. Its layout involves 243 ways on 5 reels.

The symbol that will provide you with most of the game’s features will take on the form of the Book of Gods. As you use this one both as a wild and a scatter, you can have it substitute for another symbol, it can give you a cash rewards of up to 30x the stake, or it can be a scatter and give you free spins.

You will also notice the Book opened on the left side of the screen, and with a Royal card showing up on it during each paid spin. The symbol that appears there can expand on the reel it is on, if this can result in a new win. Get them on all reels, and you might have a full screen filled with them. This feature is called Symbol Cloning.

15 to 25 free games will be accessed via 3 to 5 Book of Gods scatters. The difference is that the free spins will get one of the Gods to be the Cloning Symbol for their entire duration. With up to 20x the stake wins coming from each combo of the best paying god, you could fill up a screen with god icons and get a huge reward. This is the part that makes the slot worth it.

The free spins provide you with the huge payout, each combinations paying up to $800, but giving you a chance at 243 wins in a single round. Consider it a very high volatility release.

It’s a fun game for pro players, that enjoy a challenge and want a shot at a huge reward, even if they have to lose a lot of the time.