The futuristic design of many modern Japanese cities makes them the ideal setting for near-future and cyberpunk settings. And that’s definitely the vibe we’re getting from Quickspin’s sequel to their popular 2016 release! It has all the ingredients you need. The promise of a high life on the reels. The gorgeous view of a supercar speeding down an empty highway. And a gorgeous skyline in the background!

We really have to stress just how beautiful we think the background is. Maybe it’s just us being suckers for this sort of art-style, but we’re honestly in love. Plus, we always love when software providers are able to give us gorgeous, seamless animations. Some developers might still be struggling with that, but not Quickspin! The animations in The Wild Chase: Tokyo Go are amazing all-around!

If you like your slots sweet and simple, you’ll adore this one! Each winning combination activates a re-spin, which then expands the playing field slightly. The winning combination moves one position to the left, potentially retriggering a win or creating a new one. After a certain number of re-spins, the Super re-spin activates. What makes it super? Read on to find out!

Founded by a team of industry veterans, Quickspin quickly took the gambling world by storm. It was yet another example of a small team creating fantastic games which could rival much larger developers! Quckspin releases offer engaging gameplay and visually appealing design, ensuring slot fans will enjoy just about any game they make. The studio’s quality was quickly noticed by larger software providers, and so the developer was acquired by Playtech in 2016. 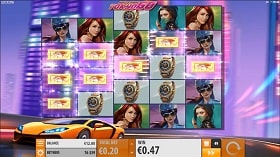 As always, Quickspin retains that instantly recognizable orange and white layout. It conveys all relevant information, it’s easy to use, and you’re never more than two clicks away from what you need. It speaks volumes that the developer never had to go back to update their user interface, even after all these years. It goes to show they’ve done it perfect the first time around!

Even Autoplay is well thought out. If you just want to automate your spins, you can do so. By clicking advanced options, you’re given the ability to set a loss and single win limit. The game itself will give you some suggested values, but you can also enter a custom one if you prefer.

What about symbol designs? Odds are, you’ll either love them or hate them. They look nice, don’t get us wrong. But the luxury theme appeals to some players, while others don’t care that much for it. So the view of champagne, expensive jewellery, gold bars, diamonds and watches might not do it for everyone. That said, I’m sure everyone can admire the cool effort that went into designing the human icons!

Every time you win, a re-spin is activated. For the first four re-spins, the playing field increases, as does the number of betways. Each re-spin pushes all winning symbols one position to the left, while remaining icons stick for the re-spin. Re-spins continue until no new wins are available.

That said, after the fourth re-spin, you unlock Super Re-spins. These are played on a fully expanded, 5×5 board with 259 betways. During Super Re-spins, all winning combinations remain in position, while the rest of the reels re-spin around them. This continues until no new wins are possible.

The Wild Chase: Tokyo Go has a medium-high variance and a jackpot worth 2757x your total stake. The slot’s RTP is 96.54%, which is above the current industry average.

Honestly, it’s a little light on the special features. The bonuses it has look very flashy. It works well with the theme and fantastic visuals, and we love that. But despite being all about the high life, you shouldn’t expect this game to give you a VIP-worthy win. If you’re looking to have a bit of fun with re-spins, The Wild Chase: Tokyo Go is a must play. If you want to win big, you’ll have to look elsewhere.

Wild Tome of the Woods