With its cute cartoon like graphics, and with the various tropical creatures and sea-life that occupy its symbols, Tropical Wilds is looking like a typical well-made slot from Rabcat. The developer offers several slots with graphics which are just as attractive, though the design style can vary. It’s cartoon-style here, with several tropical islands shown in the background. There are even a couple of smoking volcanoes a bit further away, and they appear ready to erupt.

Among its symbols, you will find that the four top Royals (J, Q, K and A) are shown as coins of different colors, while the top symbols range from a Venus Fly Trap, to fish, crabs, turtles and toucans.

Rabcat has partnered with Microgaming on several occasions, and this includes Tropical Wilds as well. You’re going to find their few slots at Microgaming casinos. The developer hails from Austria, and they have only a couple of games out so far. 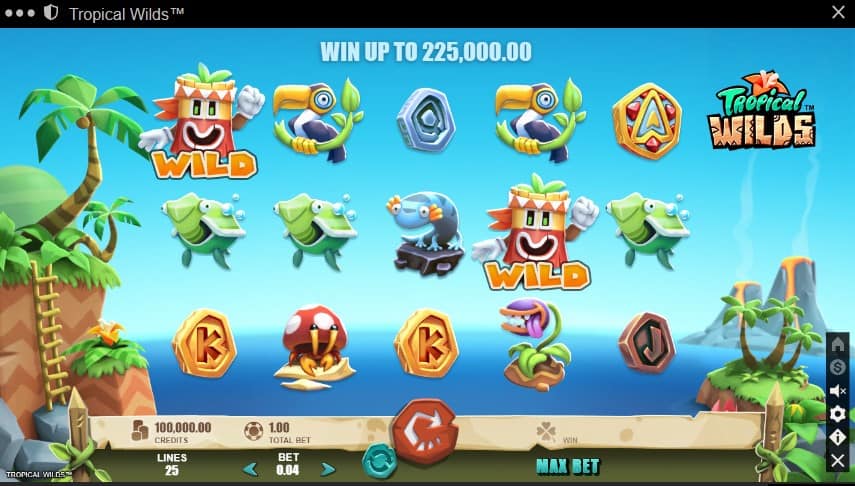 If you check out the options from the bottom section, you will find a mention of the 25 fixed lines, along with a Bet option which lets you select the amount going to each one. You pick a wager there, between $0.01 and $3, and then it will be multiplied with 25, to get you a total bet of $0.25 to $75.

Delivering 25 active lines on its 5×3 reels, Tropical Wilds has a regular system, which requires that you get 3 or more matching symbols on an active line, appearing from the leftmost position and going towards the right.

It’s mentioned in the title, so you probably expect for wild symbols to be a big part of the gameplay. It’s true, but the way you get them is not quite as expected. Mystery Boxes are used instead, to deliver one of five types of wilds in all positions that they occupy. All of them can be substitutes, they work in the same manner where that role is concerned. Four of the five will have additional abilities, while the fifth one is just the standard wild.

First, I’d mention the Boost Wilds, which will multiply prizes in combinations formed that spin. Getting up to 3 of these wilds in a combo, boosts wins by 2x to 4x. Even better, all wins of the round are multiplied, not just the ones that the wilds are a part of.

The Outburst Wild is also important, since it will expand to another location, maximizing the payout potential of the round.

Pathfinder Wilds are interesting, because they can bring you a lot of extra wilds. You need two of them initially, so that a path of wilds can form between their locations.

Tornado Wilds will be the ones which trigger the Tornado spins. They’re going to move around by one position, in a random direction, during each free spin. The feature ends once all wilds leave the game area.

Regular free spins are also possible, with 8 rounds given in exchange for 3 scatters. Inside, you benefit from the presence of one of the four special wilds, which will be randomly picked.

Tropical Wilds looks like a game that’s designed to appeal to a lot of players. It’s the medium volatility that makes me say this, along with the 96.47% RTP and the potential jackpot of 3,000x the stake ($225,000 cash).

Tropical Wilds looks like a game designed to be fun, it has plenty of humorous characters, and I like its various wild modifiers as well.