With graphics that take us back to the early 20th century, The Great Pigsby Megapays might be inspired by The Great Gatsby (a novel written by Scott Fitzgerald), but its main characters are replaced with well-dressed pigs. They’re dressed like humans of that era, and they look nice, but it’s definitely not a straight copy of the original story. You see Art Deco inspired graphics, there is a huge mansion shown in the background image, and the overall look is going to be a plus for the slot’s players.

Even the five Royals are going to have Art Deco style decorations on them, but the most impressive are the era appropriate images of cigars & whiskey glasses, gramophones, diamond headbands, or the two main characters, a female and a male pig, both very well dressed.

Relax Gaming is the company responsible for the release of this game. They might’ve gone Art Deco on its design, but they have a lot of different slots to offer, including titles like Attila The Hun, the Money Train series, or Magnetz, to give you a few examples that are fairly different, but very well made. 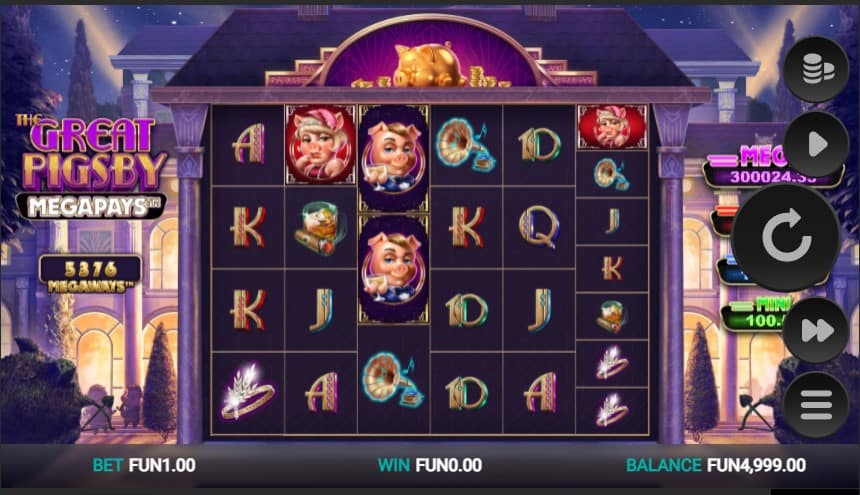 Using the options included with the Bet area, The Great Pigsby Megapays lets you spin its reels when you’re risking anywhere from $0.20 to $50 per spin.

It uses the Megaways engine, which means that each of its 6 reels get between 2 and 7 symbols. The range is big, and in a best case scenario combinations could form on up to 117,649 ways to win. Having 3-6 matching symbols on adjacent reels is enough, to make a combo happen.

Though not very common in Megaways slots, the multiplier wild is used in this case, and it’s a version that can expand to take over the entire reel. The actual multiplier is based on the number of symbols that the reel had initially, so it varies from 2x to 7x. Wilds also get collected in a piggy bank, and they can be the trigger for other features, including re-spins and free spins.

The free spins will consist of 10 rounds. You can get more 2 more spins each time that a scatter appears on the reels. At the same time, this removes one of the low value Royals from the game area, replacing it with a medium-high value icon.

With the Wild Re-spin, there is a single round, where up to 5 wild reels are used. Each one has a multiplier on it, telling you how much it contributes to winning combinations.

A Great Pigsby Re-Spin will add top-paying Pigsby symbols as overlays over multiple positions on the reels.

As for what the Megapays part of the title refers to, it’s about four jackpots that can be triggered inside, in a special feature that’s randomly activated. The game picks a Royal to become the Megapays symbol. The following spins keep track of the number of times that particular symbol appears, advancing you on a ladder. You could reach the Mega Jackpot this way (15+ symbols collected).

On its own, The Great Pigsby Megapays is already impressive, since it’s going to pay as much as 20,000x the round’s wager back to you. Additionally, there are the four progressive jackpots from the Megapays bonus, and those have good potential as well.

I think you will not be surprised with the high volatility of this slot, but at least the RTP can be fine, at 96.19% (includes the progressive jackpot with 9.44% as well though).

For a Megaways-style slot machine, The Great Pigsby Megapays is actually interesting. It includes a couple of unique features, besides the usual ones that experienced players know and love. Add that progressive jackpot as well, and the result is an excellent slot.