Stars of Orion, the latest ELK Studios game, looks like it’s dedicated to the stars, and the night’s sky is shown from the location of an ancient druid temple. There are two large stone pillars in the middle, which act as borders for the game area. The colorful symbols all drop within that zone, taking the form of 6×8 reels.

As for what the symbols will give us, there are both Super and Super Bonus symbols inside, along with the W wild. Regulars can be as basic as four symbols of different colors (purple, green, blue, red), or they will show drawings of birds, wolves, deer, and a Seven.

It’s been almost a decade since ELK Studios has launched, so we can’t call it a new developer. It’s well established by now, and it has a collection of dozens of excellent slot machines. They rely on graphics and features most of all, and lately they tend to pay fairly well. Unfortunately, the recent games have a lower RTP, of 95%, while the older ones are at 96%. 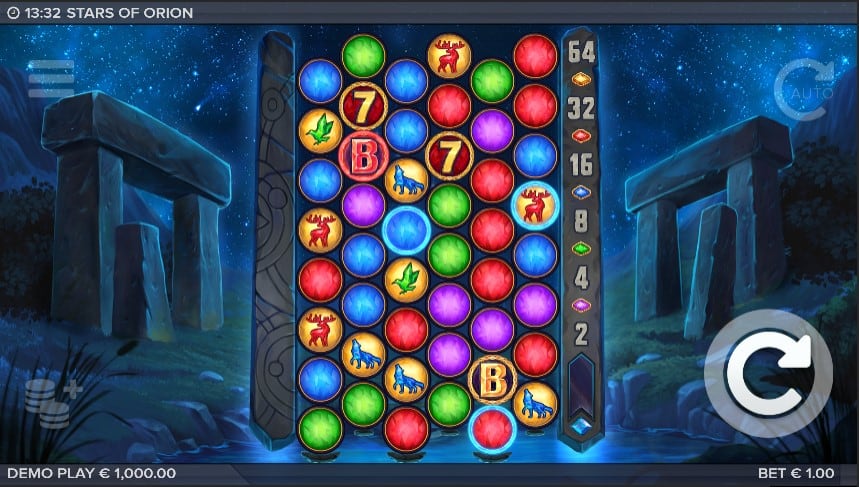 $0.20 is the lowest wager that Stars of Orion allows, and that’s with 100 coins used. You just select the total amount, so the value of the coins changes automatically, behind the scenes. As you take the wager up to $100, the coins go up to $1 each.

In this case, they chose a system with Cluster Pays, available on 6 tall reels, of 8 symbols each. Having anywhere from 5 to 15+ matching symbols that touch diagonally or vertically, will get you a winning cluster and a prize. It’s a Gravity-based system, so whenever symbols disappear, the ones on top will drop down and occupy available positions.

I’ve explained above how the Cluster Pays system works, but what I haven’t mentioned yet is the Avalanche system. It’s used in hundreds of modern slot machines, so it will not come as a surprise for most experienced players. It removes winning symbols, and brings others in, so that you have a second chance at getting clusters formed. The Avalanches continue, if that’s the case.

Wilds are also there, to help you out when possible, meaning that they need to land next to regular symbols so that they can form clusters together.

A Super version of a regular symbol will be possible as well (blue frame surrounds the symbol). To use it, you need it to be part of a winning cluster, and for it to touch another cluster at the same time. The symbols are all upgraded to the type that has the highest value (lowest paying cluster gets an upgrade).

You also collect all symbols that were part of clusters, and eventually you can get higher multipliers for your wins. They go up, and eventually they could reach 64x. Several random modifiers are also possible here, including symbol swaps, and drops that bring up to 13 wilds.

10 free drops (free spins) are triggered via 3 scatters. You use the Magic Meter to collect symbols and it only goes up, so the multiplier keeps improving, without ever resetting. It’s also easier to get Super symbols in this mode.

10,000x the stake, that’s the promise that Stars of Orion makes to its players. It’s an adequate payout for a highly volatile slot like this one, but the 95% RTP hurts it, as it’s quite a bit lower than what’s possible in other modern games.

Stars of Orion is interesting to play, but while it looks like a decent game, I’m not loving its lack of details in the design of its symbols. The 95% RTP is the one that makes it a slot worth checking out, but not pursuing in the long run.