Las Vegas is the city of choice for many slot machines, and it’s only natural, given the powerful connection that many players have with that destination and its rich gambling offer. You do see the city’s buildings and the neon signs in the background image, while the game area features all the usual gemstone-themed Royals (9-A) and classics (Sevens come in four colors, including purple, red, blue and green) that Big Time Gaming is known for. They add the wilds and scatters as well.

It’s a good enough type of design, definitely not going to come close to a NetEnt title, or to any of the other developers that are putting effort in the graphics of their slots. It’s what we’ve come to expect from BTG though, and they do make up for it in plenty of other ways.

Big Time Gaming has become hugely successful in just a couple of years, following the release of their Megaways engine. They’ve licensed it, and now we have several new games launched in that category, on a monthly basis. They’re innovating once again with the Megaquads system, and chances are that players will love this one as well. 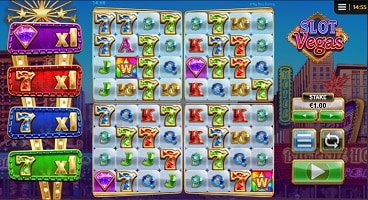 The game requires that you spend a fixed amount, chosen from a range that it gives you. The smallest wager possible is $0.20, while the highest is $20.

It’s a system that relies on four sets of reels, each one with 4×4 symbols and 256 ways to win. They work independently initially, but as the game area expands, you could end up with 16,777,216 ways. Combinations will form via 3 or 4 matching symbols, landing on consecutive reels, from left to right.

As I’ve mentioned above, there are four sets of reels, but they do get a chance to unite and provide you with more ways to win, under certain conditions.

Before we get to that, let’s check out the more basic features though. The game has a regular wild symbol, which will show up on the last three reels (2-4), where it will be used as a substitute. It’s capable of contributing to all regular combinations.

Rainbow Wilds are also available, and they are reserved for the two reels from the middle. These are also substitutes, but they add additional abilities. To get them going, you need the Rainbow Wilds landing at the same time, on two sets of reels which are next to each other (either on the top row or the bottom row). When that happens, the two will combine to give you a single set of 8 reels, where the number of ways becomes 65,536.

Additional features for the new large set will include extra wilds on the 4th and 5th reels, along with up to 5x multipliers applied to wins which involve Sevens or Diamonds, depending on how big the combinations are.

Of note here, is also the Multiplier meter, which applies to the top paying symbols. Each one has a value that will go up by 1x whenever you get a combo of four on one of the sets of reels. You get to use them when you form new combinations with those particular symbols.

The main feature of the game will bring you the free spins though, with VIP symbols required to appear 4+ times. They’re played on two sets of reels, their size being increased to 4×8 reels and 4096 ways. You can combine them when Rainbow Wilds land on both, and then you play with 8×8 reels and 16,777,216 ways. You add up the multipliers from the base game and use them in the free spins, but you continue to increase the value as well, through the same premium symbols which form wins.

45,000x the stake is the ultimate reward that Slot Vegas Megaquads promises to deliver, which is very good. The high volatility and 96.59% RTP tell us that the risk is there, but on average the game gives plenty of love back.

Slot Vegas Megaquads looks like it’s going to be one more very successful slot machine from Big Time Gaming, offering the player exciting new mechanics, which involve up to four sets of reels, multipliers and free spins. Add a 45,000x jackpot, and you should have plenty of motivation to give it a try.